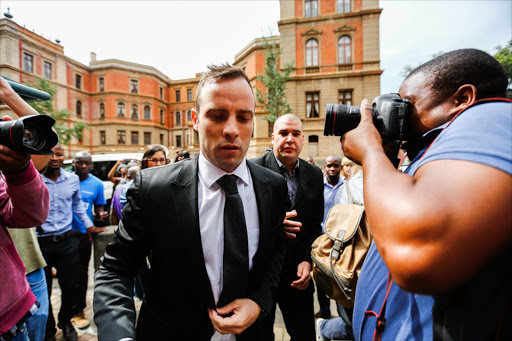 08 December 2015. South African Olympian Oscar Pistorius arrives at the North Gauteng High Court in Pretoria for his bail application. Moments later he was granted bail while he awaits sentence for murdering his girlfriend Reeva Steenkamp in 2013. Bail was set at 10,000 rand, Pistorius was deemed not to be a flight risk by Judge Audrey Ledwaba. Pistorius can remain under house arrest at his uncle's home until sentencing next year April the 18th and will be electronically tagged. He also had to hand over his passport.
Image: Moeletsi Mabe/ The Times

It was announced at the beginning of May that pre-production for Beyond Reasonable Fact, a documentary based on the killing of Reeva Steenkamp by paralympian Oscar Pistorius, had begun.

Hartiwood Films and Deepened Films acquired the film and documentary rights from Pan Macmillan South Africa to the book Behind the Door, written by local journalists Mandy Wiener and Barry Bateman.

It's believed that the documentary may extend into three parts, exploring the events leading up to the killing of Steenkamp.

Executive producer at Deepend Films Paulene Abrey told EWN that there has been interest around the documentary at the Cannes Film Festival currently underway.

"It's not going to be one documentary but a process of two or three. It's like OJ Simpson's - a continual thing."

The People v. O.J. Simpson: American Crime Story attracted massive hype as it detailed events leading up to the killing of Nicole Brown Simpson and her friend Ron Goldman over ten episodes, again reigniting debate on the non-guilty verdict in the case.

It's believed that production on the documentary series will start in a few months time.