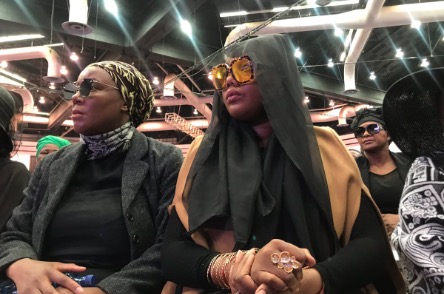 Lerato Sengadi seated next to her mom at Jabba's funeral.
Image: TshisaLIVE

Just two days after hip-hop star HHP aka Jabba was laid to rest, the feud between his family and wife, Lerato Sengadi seems to be far from over. This after, it has been reported that she "kicked" HHP's helper and her son out.

According to SowetanLIVE Lerato has allegedly taken over the matrimonial house she shared with HHP in Randpark Ridge, Johannesburg. She apparently went to the home in with the police, broke the locks and replaced them with new ones.

"Lerato came around 1am this morning [Sunday] and broke the locks. She locked out the helper and her son who have been living there since 2004," Tsambo family spokesperson Nkululeko Ncana told the paper.

Numerous attempts by TshisaLIVE to get comment from Lerato were unsuccessful by the time of publishing this article.

Barely hours after his father’s funeral, #HHP’s son has been illegally booted out of his father’s house after instructions were given to locksmiths to move in between 12midnight -1am. #CustomaryWife

A case of breaking and entering has been opened with Honeydew police station. #HHP’s son’s stuff outside, amongst the stuff is his school uniform and books. #CustomaryWife sent some heavies with questionable hygiene habits, and the cops saying we’re trespassing! pic.twitter.com/ZTvi44lnhT

I actually was. I went to fetch the boy’s things. I’m happy to get sued. Facts can’t be created. There are neighbors and other ppl present who further witnessed this. And yes, he back from Mahikeng. https://t.co/xUeZVlO8US

Sadly, it’s the person who hasn’t lived there and refused to for many months that has now locked out someone who lived there everyday with his dad. It’s a fact. https://t.co/zSTOxub0gd

HHP died on October 24 after taking his own life after a long battle with depression.

After being rejected by HHP's family as his wife and was excluded from all funeral arrangements, Lerato took the late star's father Robert Tsambo to court on Friday.

The court found that by law HHP and Lerato had entered into customary union, and that all his belongings including his house keys should be returned to her.

HHP was buried on Saturday in Mahikeng, North West, after an emotional funeral service. A raging debate about Lerato being 'snubbed' at the funeral has since dominated talk on social media.

Lerato was left out of the obituary and was not acknowledged by any of the speakers. It seems that even though the court found Lerato to be HHP's customary wife, his family still don't recognise her.

Rapper Jabulani "HHP" Tsambo was laid to rest on Saturday November 3 2018 in Mmabatho, Mahikeng, in an emotional send-off.

"Where Jesus turned water into wine, Jabba was creating superstars."
TshisaLIVE
3 years ago

The family of HHP have released a statement dismissing suggestions that Lerato Sengadi is the late rapper's widow, the Sowetan reported.
TshisaLIVE
3 years ago

WATCH | Lerato Sengadi on HHP: 'I will continue to protect you in death as I did when you were alive'

HHP will be laid to rest on Saturday.
TshisaLIVE
3 years ago