The Big Read: ANC defies laws of logic as party sows seeds of own destruction 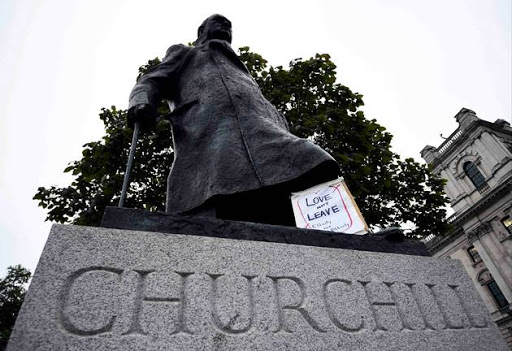 A sign is seen placed on the Winston Churchill statue in Parliament Square, during a protest aimed at showing London's solidarity with the European Union following the recent EU referendum, in central London, Britain June 28, 2016.
Image: DYLAN MARTINEZ

"So they go on in strange paradox, decided only to be undecided, resolved to be irresolute, adamant for drift, solid for fluidity, all-powerful to be impotent."

Such could be the vivid conclusion from Sunday's NEC meeting of the ANC and its decision to hang on, with grim intensity, to the presidency of Jacob Zuma.

In reality, however, those powerful words were uttered in November 1936, with devastating effect, in the House of Commons by Winston Churchill.

It sounds absurd to write the words "Churchill" and "the ANC" in the same piece. But it is noteworthy that the great UK statesman - on that occasion - uttered his devastating critique against his own party and government. He was targeting the hapless leadership of prime minister Stanley Baldwin and his government's lack of preparation of air defences against a rising German Nazi Reich.

Within three years the UK would be at war with Germany and in 1940 Churchill, reviled by his own party at the time of his criticism of it, would be called to lead both it and the UK at its moment of peril. Initially, and defiantly, he stood alone against the Nazi behemoth. And, as they say in the classics, the rest is history.

Back to the less inspiring events this past weekend.

While Churchill had no compunction in attacking his own party when he believed its temporising with the Nazi tyranny so demanded, South Africa's ANC offers an even more curious, to use a Churchillian word , "paradox".

There was a time - about 20 years ago and counting - when the ANC put the country ahead of the party. But the most curious, and under-remarked, outcome of the weekend ANC shindig was that the ruling party put one hobbled and fatally compromised and deeply unpopular man ahead of the party itself.

My many years of close encounters with a then rampant ANC induced a sense of deep respect for its ruthless instinct to win and its uncanny ability to protect itself and self-correct where necessary.

Back at the constitutional negotiations, it conquered all before it: a hapless National Party government, most of civil society, especially the ranks of the clerics, the academic and business communities, the trade union movement, and certainly the media, or at least that section of it outside government control.

Yet in the run-up to last weekend, every section of society which had willed the ANC to win back then had now turned against it. A group of eminent church leaders - the National Religious Leaders' Council - called on Zuma to step down, stating he had "lost all moral legitimacy", quite a statement from those whose currency is morality.

Then, just last Thursday, nine academics from leading South African universities did what ousted finance minister Pravin Gordhan urged. They "joined the dots". Their report, Betrayal of the Promise: How South Africa is Being Stolen, provides chapter and verse - in excruciating detail - on how the state and its coffers are being plundered by Zuma and his cronies and political apparatchiks.

"Save South Africa" and a clutch of other CEO heavyweights have indicated that the current and flagrant excesses and illegalities of the Zuma administration have finally caused the normal quiescent business leadership to end its quiet ways.

As if not enough misery was being poured over the head of the head of state, last week added two more buckets of gloom into the mix. The once staunch Cosatu trade union federation announced a ban on Zuma attending its rallies. And then there was Nquthu in the heart of Zuma's Zululand redoubt. The by-election results on Wednesday proved in the ANC rural heartland what the less-loyal urban metros signalled last year. Hanging onto Zuma is a vote-losing strategy. The Inkatha Freedom Party sweep is almost the electoral equivalent of Lazarus being raised from the dead and Zuma inadvertently performed this favour for his once-mortal electoral enemy.

Finally, the press and the smoking guns. Having once seen the ANC as the moral avatar for ridding this country of its ignoble past, the free (outside the Gupta TV and print offerings and SABC) media here have turned on the party with a fury. Both the Sunday Times and City Press provided their readers with irrefutable, e-mailed proof that one family of émigrés in Saxonwold has far more sway over the fortunes of the state and even key cabinet members than the party which appointed them and the parliament to which, in constitutional theory, they are answerable.

And the e-mails prove the rot is much worse than anyone thought.

The crowning irony of the NEC decision to hang onto Zuma and attempt to defy the laws of logic, politics, answerability and self-preservation is that it met at a Gauteng highway hotel rejoicing in the name "Saint George".

According to mythology, St George slayed a dragon that had terrorised the countryside by demanding first the local sheep and then the children to appease its greed and hunger.

There were no St Georges at the hotel last Sunday, or not enough of them to end the feeding frenzy which is destroying the constitutional project that Zuma swore to uphold but is now upending.

But, according to reports and leaks from the weekend meeting, there were 18 NEC members who supported a motion of no confidence against him.

This is at least a somewhat better showing than that found in the biblical city of Sodom. The Bible reminds us that there was a bargain between Abraham and the Lord. The latter first demanded 50 good men to save the evil city from destruction. Abraham eventually bargained him down to 10. But even that little number could not be found. And so the city was destroyed to rid it of both the evil it represented and its bad citizens.

You can take your pick from history, or from mythology and even the Bible. Or if you are in the business of politics, perhaps you should be able to read the results of local elections.

In the event, the ANC at the weekend ignored the lot.

Analyst Ralph Mathekga wrote this week that this proved, finally, that "the party has lost touch with reality". Interestingly, he is also the author of a book titled When Zuma Goes. But the "when" is a long time in coming. Especially as, in Churchill's memorable words, his party is "resolved to be irresolute".

And, aside from Zuma, the only winners from the weekend are the ANC's opponents. Strange days indeed for a once-winning and invincible party.