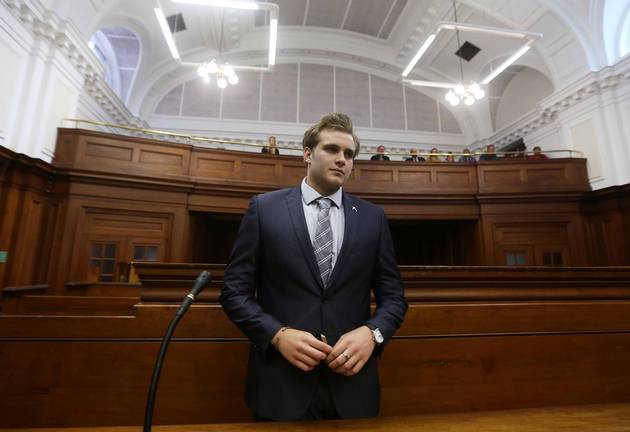 Why did Henri van Breda hack his parents and brother to death with an axe and leave his sister bleeding for hours on the morning of January 27‚ 2015? Only he knows.

But for those of us who sat in the trial for 67 days‚ wrote countless media reports‚ fielded questions from curious acquaintances‚ and - according to our children - spoke about murder most foul when we dozed off on the couch in the early evenings‚ it is a question that won’t go away.

For the public‚ too‚ the question of motive still hangs over this whole brutal affair. There is no definitive answer‚ but much to think about. First and foremost is the obvious question of mental illness: Could Henri be a psychopath?

I am no scientist or doctor‚ but as a science reporter with a keen interest in mental disorders‚ and as someone who kept my eyes peeled on this young man for so many days‚ my impression of him did an about-turn on day 55 during the trial.

Prior to that‚ it seemed to me that if he had done it‚ he was possibly a “normal” youngster who for some reason had a night of sheer mania that drove him to commit an act of unimaginable horror that he himself might never understand.

But when he stepped into the witness box‚ my perceptions changed.

Chillingly devoid of emotion‚ he had a matter-of-fact tone as he shared details of‚ for example‚ his mother lying and bleeding to death at the top of the staircase. Even reenacting the murders (by the mythical intruder he had conjured up in his plea statement) brought no flicker of sadness to his eyes. Neither did it bring the shiftiness or shame one sees in the eyes of a liar in the act.

Smooth as silk‚ unflustered‚ and highly articulate‚ his testimony turned my blood cold.

If someone told me I was staring into the eyes of a psychopath‚ I would have no trouble believing them. This‚ of course‚ raises the question of whether one should despise or feel huge pity for someone whose brain is wired so dangerously.

Henri van Breda didn’t have to give evidence in his own defence‚ but he elected to do so.
News
4 years ago

According to American researcher and neuroscientist Joshua Buckholtz‚ “a lack of emotion isn’t the only thing driving psychopaths”. His research found that their brains also “overvalue the pleasure associated with getting what they want” and this may result in “callous and manipulative acts”. Through his research‚ he found that “the brains of people with psychopathic tendencies are rich with dopamine‚ a reward chemical that makes us seek out pleasure”.

This might drive them to hurt or even kill others as they seek out rewards without considering the costs of their actions. This brings me to the next question on the lips of anyone who has been following the case: could drugs have made him do it?

This past weekend‚ Rapport newspaper reported that Martin and Teresa had‚ according to Martin’s older twin brothers‚ threatened to cut Henri off from the family allowance if he carried on using drugs.

This takes the public mind right back to the beginning. After the news of the brutal murders rocked the community of Stellenbosch‚ and then spread across the country‚ rumours leapt around that Henri was a drug addict. This made sense. Had he perhaps killed the family during a drug-induced psychotic episode?

It seemed logical. But then‚ 18 months after the murders when he was finally arrested‚ the state and defence began scrutinising forensic evidence. And there it was in black and white: drug tests performed on Henri after the attacks proved that there was nothing of this nature in his bloodstream. So then‚ the question shifts to one of long-term effects. If the uncles are telling the truth (and one has no reason to disbelieve them)‚ is it possible that Henri’s relationship with drugs had had a long-lasting effect on his chemical make-up? One doesn’t have to be using drugs at the actual moment that one commits a heinous act resulting from drug use. This is especially true of ‘tik’.

According to the American Addiction Centers organisations‚ “When it comes to methamphetamine‚ psychosis can actually spontaneously re-appear in people who have been clean of the drug for many years.”

The only survivor of Henri van Breda’s bloody axe attack on his family‚ his younger sister Marli‚ will not comment on the guilty verdicts delivered ...
News
4 years ago

He could have had a psychotic episode. He could be a psychopath who held no sense of the fallout of his actions. And‚ as anyone who has known or loved a drug addict will tell you‚ separating the user from the substance can create a monster where a mensch once stood.

Then there’s the issue of comorbidity: could it be that Henri is both a psychopath and a substance abuser‚ and that these two disorders possibly played into each other?

This is‚ in fact‚ a common scenario. According to the National Institute of Drug Abuse (based in the UK)‚ “Many individuals who develop substance use disorders (SUD) are also diagnosed with mental disorders‚ and vice versa.”

They say that multiple national population surveys have found that “about half of those who experience a mental illness during their lives will also experience a substance use disorder and vice versa”. This is particularly true in adolescents where “over 60 percent of adolescents in community-based substance use disorder treatment programmes also meet diagnostic criteria for another mental illness.”

And finally‚ there is the issue of family dynamics in which a person can get tangled up - and finally snap. Is that what happened to Henri?

It is unclear whether Henri van Breda will appeal against the guilty verdict delivered by Judge Siraj Desai in the Cape Town High Court on Monday.
News
4 years ago

Barry Varkel‚ a commercial lawyer I had interviewed for a story I wrote about Henri’s legal fees last week‚ raised the issue of high-achieving entrepreneurs who cast a pall of expectation over their children‚ only to feel deep disappointment when they don’t perform in that way.

That‚ of course‚ happens in countless families‚ and doesn’t end in murder. But if a personality disorder‚ or a folie a deux‚ or a drug-induced psychosis‚ for example‚ are thrown into the mix‚ that is when a harsh family dynamic can end in bloody murder.

On the phone with me‚ Varkel mentioned a case that had also run through my own mind during the course of the Van Breda trial - the Menendez brothers. The true story of these two brothers is a concoction of similar ingredients to that of the Van Breda story‚ and a concoction that also ended in the gruesome murders of those they were meant to love.

Henri van Breda put all his eggs into one basket‚ squandering what he had of the family money on a slick and hardworking defence team who‚ for 66 ...
News
4 years ago

Almost thirty years ago‚ Erik and Lyle Menendez shot their parents in cold blood while they sat watching The Spy who Loved Me on television. Like Henri‚ the two were about to embark on what some call the “prime” of one’s life.

Henri was 20 when he axed his parents to death and at the time of shooting their parents - their mother so many times in the face that she was beyond recognition - Erik Menendez was 18 and Lyle was 21. Like Henri‚they pleaded innocent‚ citing an evil intruder as the culprit.

Their father‚ Jose‚ was a Cuban who had fought tooth and nail in America to work his way up the corporate ladder. His sheer drive was something he wished his sons to emulate‚ but to no avail.

What came out repeatedly during and after the trial from the two men was how their father had belittled them‚ forever pointing out that they were failures who were showing no signs of following his own path of success. Lyle had said in an interview with the Los Angeles Times: “My father suffered from being a perfectionist. It carried over into his home life‚ and it was difficult for Erik and me...it wore on us.”

For weeks‚ two housewives from Somerset West have travelled to Keerom Street‚ Cape Town‚ for one thing: to watch a real life horror unfold in public.
News
4 years ago

But again‚ this is where subjectivity and afterthought smudge the pages of history. The Menendez brothers went on to accuse their parents of physical and sexual abuse - claims that were fiercely refuted by some relatives and described as highly possible by others.

As Varkel put it: “Jose Menendez built an empire. His sons only knew a life of fancy cars and schools. He called them stupid and useless and ran them down and said they would be nowhere without him spoiling them. He said they don't know what a hard day's work was.” There has been no suggestion whatsoever that Martin van Breda was abusive towards Henri. But what did emerge in court was that he wanted the best from his children and put pressure on them to succeed in the same way he had - even as he provided every privilege that money can buy.

Marli’s ex-boyfriend described a family fight that was sparked by Martin commenting on Marli’s weight gain.

Martin’s older brother Andre testified that he had raised his children to do their best‚ and that Martin himself had been a highly astute and successful businessman as referenced by the vast assets he left in his wake. Could one take this along a trajectory and imagine‚ behind closed gates at 12 Goske Street‚ Martin constantly telling Henri he was a loser and a dropout?

He had returned to South Africa from Australia for a “gap year” in the middle of the academic curriculum. Family friends also told the press he had always seemed a bit of a “black sheep” against the backdrop of the “perfect” Van Breda family as a child.

And‚ especially when contrasted with brother Rudi who was gorgeous‚ sporty and academic‚ who had a winning smile‚ and turned everything he touched to gold‚ could Henri have snapped?

Forensic pathologists testified in court that Rudi was attacked first‚ and the most viciously of all the victims. Was this a pure rage of Biblical proportion that began with one ego-bruised brother killing another who carried a halo? It seems extreme. But then bring drug addiction into the mix. Or psychopathy. Or both. And‚ suddenly‚ you have the makings of a family murder.