Ferrari rival Vettel is third on the grid. 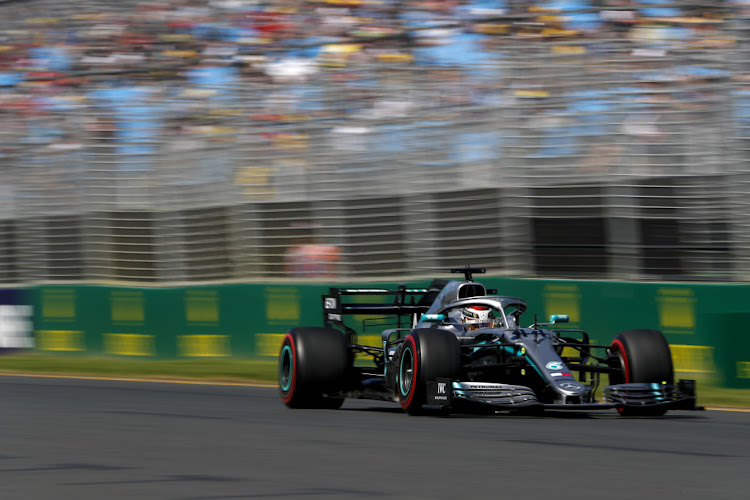 Formula One champion Lewis Hamilton blazed to a record-extending eighth pole and sixth in succession at the Australian Grand Prix on Saturday to lead Valtteri Bottas to a Mercedes sweep of the front row of the grid.

Hamilton struggled with a brake problem during the frenetic final session at Albert Park but edged his Finnish team mate by 0.112 seconds with a searing second lap of one minute 20.486 seconds that set a record at the lakeside circuit.

The one-two punch by Mercedes left Ferrari and their championship rivals stunned, with Hamilton's chief challenger Sebastian Vettel, who qualified third, more than seven-tenths of a second off the five-times champion's pace.

"Oh man, I'm shaking it was so close out there," Briton 34-year-old Hamilton said after extending his pole record to 84 on a warm, sunny afternoon in Melbourne.

"Coming from winter testing, we had no idea where we would be. We were hoping to be where we are ... Valtteri did an exceptional job out there, it was very close."

Hamilton matched Ayrton Senna and Michael Schumacher for the record number of poles at a single race track.

Senna took his eight at Imola, with Schumacher dominating the Suzuka circuit.

It would have felt like 'deja vu' for Ferrari, having trailed Mercedes by nearly seven-tenths of a second in qualifying at last year's race.

"Certainly Mercedes are the clear favourite," Vettel told reporters with a touch of resignation.

"I'm certainly surprised (by their pace), I think everybody is, probably even themselves."

While Verstappen's pace was encouraging for Red Bull on the debut of their Honda partnership, Toro Rosso graduate Pierre Gasly was eliminated in Q1 and will start 17th on the grid.

Renault, meanwhile, had a bigger reality check, with neither of their cars able to reach Q3.

Their expensive new recruit Daniel Ricciardo, who transferred from Red Bull in the off-season, qualified 12th behind his 11th-placed team mate Nico Hulkenberg.

It was a joyful day for the youngest man on the track as 19-year-old Briton Lando Norris qualified eighth behind the two Haas cars in a boost for McLaren.

The debutant outshone his senior teammate Carlos Sainz who will start 18th, having been knocked out in Q1 and blocked during his last flying lap by Williams driver Robert Kubica.

Former world champion Kimi Raikkonen, 20 years Norris's senior, will also start one behind the Briton despite a solid debut for Alfa Romeo, the team formerly known as Sauber.

Toro Rosso's Anglo-Thai debutant Alexander Albon made it through Q1 to secure 13th on the grid in an encouraging start.

Kubica's first F1 qualifying in over eight years was forgettable. He suffered a right rear puncture and ended up skidding over the grass on his final effort in Q1.

The Pole will line up last on the grid behind his 19th-placed rookie team mate George Russell, the Williams team proving well off the pace after their off-season troubles.

Chaotic team and uncompetitive car give Pole other things to think about.
Motoring
2 years ago