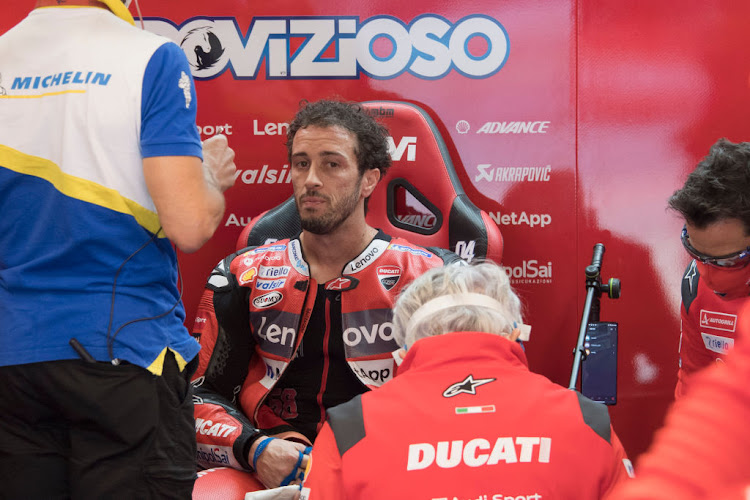 Andrea Dovizioso of Italy and Ducati Team speaks with mechanics during qualifying for the MotoGP of Catalunya at Circuit de Barcelona-Catalunya on September 26 2020 in Barcelona.
Image: Mirco Lazzari gp/Getty Images

Italian Andrea Dovizioso insists he's not worried about his future in MotoGP and is seriously considering a role as a test rider next season.

Dovizioso, 34, will leave Ducati at the end of the season, bringing to an end his eight-year association with the team. He has been linked with a move to Aprilia, where he could partner Spaniard Aleix Espargaro next year.

“When I have any news I will tell you,” Dovizioso told reporters when asked if he had secured a seat for the 2021 season. “I'm working on that but I don't have any stress to make a decision.”

“Test rider is a big option for me for sure.”

Dovizioso has won 13 races since joining Ducati in 2013, finishing runner-up in the championship in the last three seasons.

He is fourth in the world championship standings with 84 points, 24 behind leader Fabio Quartararo heading into this weekend's French Grand Prix.

Raikkonen quips he has gone from too inexperienced to too old

Kimi Raikkonen jokingly summed up his 20-season Formula One career on Thursday as a progression from too inexperienced to too old, with good bits in ...
Motoring
11 months ago

Formula One world champion Lewis Hamilton said on Thursday he saw no need for a new racetrack in Rio de Janeiro and was against cutting down forest ...
Motoring
11 months ago