Valtteri Bottas looks to be on borrowed time at Mercedes 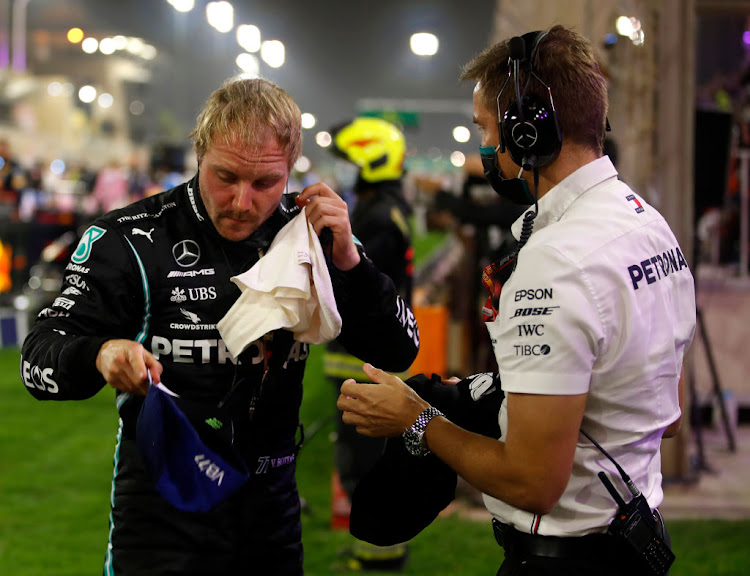 Valtteri Bottas of Finland and Mercedes GP prepares to drive on the grid before the F1 Grand Prix of Sakhir at Bahrain International Circuit on December 6 2020 in Bahrain, Bahrain.
Image: Hamad I Mohammed - Pool/Getty Images

Valtteri Bottas looks increasingly on borrowed time at Mercedes after George Russell showed the Formula One world champions just how good he can be.

Russell, 22, was drafted in as a late replacement for Lewis Hamilton at Sunday's Sakhir Grand Prix when the seven-times champion tested positive for Covid-19, but at times it looked like the older Briton was at the wheel.

Apart from qualifying, when Bottas took pole by a whisker, Russell had the measure of the Finn and could have won but for a team error and misfortune.

“We learnt that George Russell is somebody to count on in the future,” Mercedes team boss Toto Wolff said. “He has all the potential and all the ingredients that a future star needs.”

Russell, the 2018 Formula Two champion, has a long-term contract with Mercedes and has been learning the ropes at struggling Williams. The future looks bright for him.

George Russell was left with mixed feelings after losing out on an almost certain maiden Formula One win on his Mercedes debut in Sunday’s Sakhir ...
Motoring
1 year ago

Less so for Bottas, who after being regularly beaten by one British driver, now has to worry about another taking his seat when his contract runs out at the end of 2021.

“If you don’t know things, I might have looked like a ... fool, you know,” said the Finn of an afternoon that saw him finish eighth and one place ahead of Russell. “It will be very easy for people to say that a new guy comes in and beats the guy who’s been in the team for a few years.

“But the people who know, they know how is the performance and how the end result could have been,” said Bottas, who has been at Mercedes since 2017.

Bottas has had plenty of misfortune — former racer Martin Brundle quipped on Sunday that if the Finn did not have bad luck he'd have no luck at all — and has won only twice this year, compared to Hamilton's 11.

Hamilton has yet to sign a contract extension but is expected to do so, and in the not-so-distant future may find himself in an all-British line-up.

“I can understand that it would be an interesting situation to have them both in the team, and maybe a bit of a wild ride for all of us,” said Wolff. “But maybe we’ll have them in the future.”

Wolff on Russell: A star is born and sky's the limit

The sky's the limit for George Russell after the British youngster's stellar performance as Lewis Hamilton's stand-in at the Sakhir Grand Prix, ...
Motoring
1 year ago

Ferrari's Charles Leclerc will have a three place grid drop at the season-ending Abu Dhabi Formula One Grand Prix after he caused a first lap ...
Motoring
1 year ago

An "overwhelmed" Mick Schumacher graduated to Formula One as the 2020 Formula Two champion on Sunday despite failing to score in his last race before ...
Motoring
1 year ago