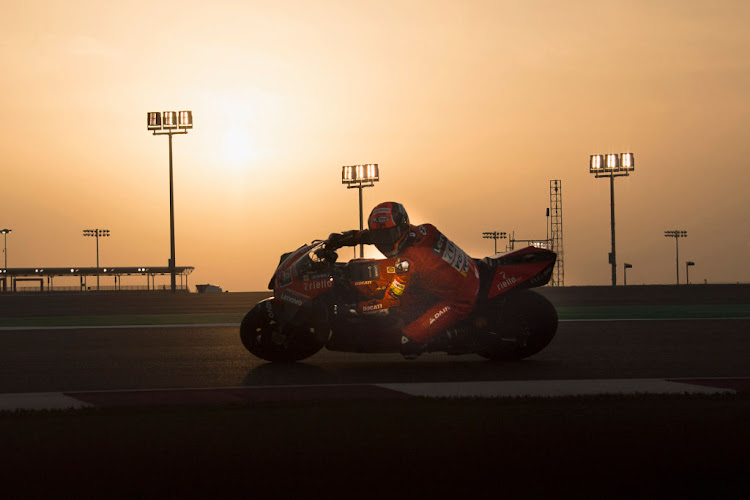 Danilo Petrucci of Italy and Ducati Team rounds the bend during the MotoGP tests at Losail Circuit on February 24 2020 in Doha, Qatar.
Image: Photo by Mirco Lazzari gp/Getty Images

The MotoGP season will start with two races on successive weekends in Qatar from March 28, followed by Portugal, organisers said on Friday in a calendar rewrite forced by the Covid-19 pandemic.

Early season races in Texas and Argentina have been postponed.

The Qatar Grand Prix, a floodlit night race, has long been the opener but will now be followed by a Grand Prix of Doha at the same Losail circuit on April 4.

“The ongoing Covid-19 pandemic and resulting lockdowns and complications sadly oblige the postponement of both the Argentina GP and the Americas GP until the last quarter of 2021,” MotoGP said in a statement.

The Argentina round at Termas de Rio Hondo had been scheduled for April 11, with Austin's Circuit of the Americas due to follow a week later, on a provisional 20-race calendar published last November. No new dates were set.

Last year's pandemic-hit season started with two races at Jerez. The southern Spanish track will now host round four on May 2.

Portugal's Algarve circuit near Portimao ended the 2020 season in November and is set for plenty of international action this year, with the World Endurance Championship rescheduling its opener for there and Formula One also expected to return.

Qatar will also host preseason testing after planned sessions in Malaysia were scrapped, also because of the pandemic.

The announcement of the March 28 starting date ended uncertainty about the scheduling of a grand prix that clashes with Formula One's opener on the same evening in nearby Bahrain.

MotoGP indicated that further changes could be made, however.

Button returns to Williams F1 in an advisory role

The Williams Formula One team have signed 2009 world champion Jenson Button as an adviser, 21 years after handing him his grand prix debut
Motoring
2 months ago

Red Bull have agreed a deal to continue using Honda's power unit after the Japanese manufacturer leaves Formula One next year but it depends on a ...
Motoring
2 months ago