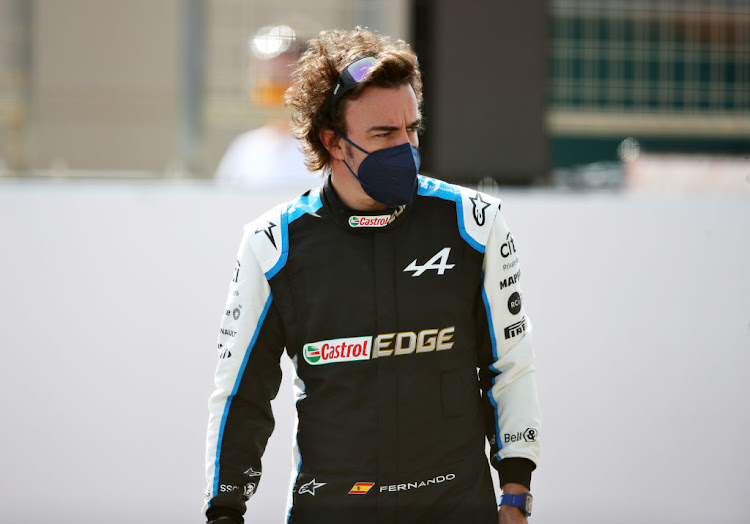 Fernando Alonso of Spain and Alpine F1 Team looks on from the grid during Day One of F1 Testing at Bahrain International Circuit on March 12, 2021 in Bahrain, Bahrain.
Image: Joe Portlock/Getty Images

Two-time Formula One world champion Fernando Alonso said on Friday he expects to race all season with titanium plates in his broken jaw.

The 39-year-old Spaniard told reporters at testing in Bahrain on Friday that he did not expect any issues on track, however, in what will be his comeback campaign after two years away.

“I've been training for two weeks as normal. I've been in the simulator as well on Monday and Tuesday,” he said when asked about the lingering effects of a road accident in Switzerland while cycling in February.

“The preparations were not affected too much, I missed only a couple of marketing and filming days which I was happy in a way (to miss)," added the Alpine driver, who was absent from the team's livery launch. “I feel fine.”

He added: “I will have to remove two titanium plates that I have on the upper jaw, they will be removed I think at the end of the season. So still something going on after the championship finishes but it will not be affecting my professional life.”

Alonso, who won his titles with Renault in 2005 and 2006, last raced in Formula One with McLaren in 2018. He will be 40 in July but is still younger than Alfa Romeo's Kimi Raikkonen.

Asked about his goals, and whether he could hope to win races and championships again with a team that finished fifth last year, the two-time Le Mans 24 Hours winner said he still had plenty to offer.

“The main (reason) why I am here or came back is because I felt I was at my best in the last couple of years, I felt I was driving better than ever and had to make a decision on what was the next challenge,” Alonso said.

“I thought that being at my best now, Formula One was the place to be.

“To win races and championships I think you need a few more things than just your motivation or beliefs. You need a package, the luck, the momentum. It's something we want to build with the new Alpine name.”

Gearbox glitch for Mercedes as Ricciardo goes top in testing

Champions Mercedes managed only six laps by lunchtime due to a gearbox problem while McLaren's new signing Daniel Ricciardo set the pace in Formula ...
Motoring
2 months ago

Bahrain is hosting three days of pre-season testing and the opening race on March 28 and has offered doses of the Pfizer BioNTech vaccine to all the ...
Motoring
2 months ago

Alfa Romeo team principal Frederic Vasseur has tested positive for Covid-19 and will not fly to Bahrain for pre-season testing from March 12-14, ...
Motoring
2 months ago
Next Article