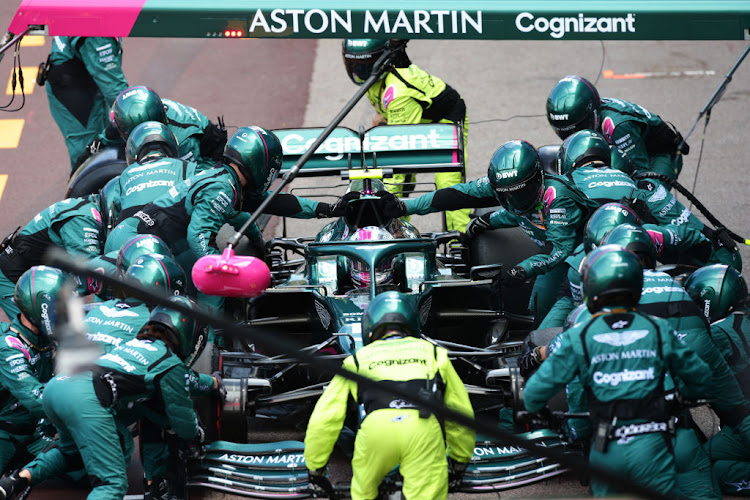 Sebastian Vettel makes a pitstop during the F1 Grand Prix of Monaco at Circuit de Monaco on May 23, 2021 in Monte-Carlo, Monaco.
Image: Peter Fox/Getty Images

The Aston Martin Formula One team on Tuesday announced  a partnership with the Racing Pride movement and said it will work through June to raise awareness of LGBTQ+ diversity in the male-dominated sport.

Racing Pride was founded in 2019 to create visibility for the lesbian, gay, bisexual and transgender community in motorsport and challenge negative stereotypes and misconceptions.

Racing Pride logos will appear on the race cars at the June 20 French Grand Prix.

“I congratulate the people who have pushed the discussion that has led to wider inclusion,” said four-time world champion Sebastian Vettel, who drives for the team along with Canadian Lance Stroll, in a statement.

“Equally, I’m aware that more needs to be done to change attitudes and remove much of the remaining negativity,” added the German.

“The reach they can give it is something that will make a real difference,” he told Reuters.

Morris recalled the day he took to social media in 2018, with shaking hands, to announce he was gay. He said the reaction was overwhelmingly positive and his track performances had improved.

Before then he had worried about not fitting the stereotype of a racing driver, not knowing whether he would be accepted by the sport or even if there were others like him.

“To have Aston Martin be the first team at that level to directly and explicitly say to the LGBTQ+ community ‘you belong, we support you, you are valued’ — that has a massive far-reaching impact,” he said.

Aston Martin, owned by Stroll's billionaire father Lawrence and with tech giant Cognizant as their title sponsor, said they will hold workshops, coaching sessions and seminars for team members.

Morris said that while direct aggressive homophobia was rare in motorsport, the use of casual homophobic language needed to be addressed.

“It sets up an expectation for people coming into the sport of who they should be and I spent a lot of time trying to be that person that I thought I should be,” he said.

“Since I’ve been able to talk in this sort of way about being gay in the sport and about Racing Pride, it’s allowed me to just be the person I am rather than the person who is this construct of who I should be.”

Aston Martin F1 communications director Matt Bishop said much had changed since he arrived in Formula One in the 1990s as an openly gay journalist before joining McLaren.

He said he had felt like “the only gay in the village” but e-mails from personal accounts over the years had made clear he was not.

“They were saying ... 'I'm a mechanic or an engineer and I wish I could come out. I have to live in secret. I can’t admit to my team mates that I am gay’," he said.

“Even in 2021 they still go on now from time to time. From people who have been in that position perhaps for 15 or 20 years.”

Only three known LGBTQ+ drivers have competed in Formula One since the world championship began in 1950 and none since the 1970s. All are now dead.

"Mr Dakar" Stephane Peterhansel and triple champion Carlos Sainz have joined Audi's bid to win the 2022 edition of the endurance rally with an ...
Motoring
7 months ago

Kyle Larson put on a show in prime time on Sunday as he streaked to a dominating victory in the crown jewel Coca-Cola 600 NASCAR Cup Series race at ...
Motoring
7 months ago