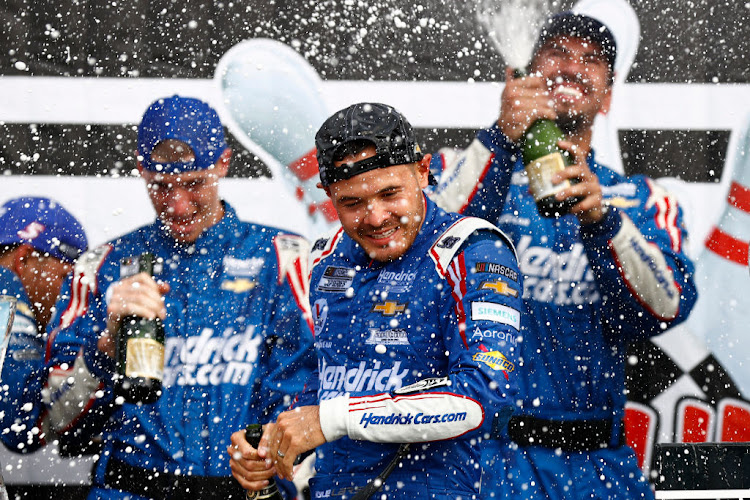 After a five-race absence, Kyle Larson returned to victory lane on Sunday when he won the Go Bowling at the Glen NASCAR Cup Series race at the Watkins Glen International road circuit.

The victory was Larson's fifth of the season and second on a road course, as he won at Sonoma back in early June.

It was the California native's first win at the historic, seven-turn, 2.45-mile (3.94km) Watkins Glen track.

“Another amazing car,” Larson said. “I could tell from about lap 3, after I stopped making a bunch of mistakes, that we were going to have a car that could win today.”

His victory came with a nice assist from his Hendrick Motorsports pit crew as it allowed him to pass leader Martin Truex, Jr. during green flag stops on lap 57 of the 90-lap event.

The victory was the 11th for a Hendrick car this season as all four of its drivers have secured victories.

“It's awesome,” said Larson, who is in his first season with Hendrick after being fired by Chip Ganassi Racing last year. “It really just shows how good their organisation is. The people they've assembled at the race shop, all the men and women. All four of us could not be getting these wins without them.

Chase Elliott of the Hendrick team didn't succeed in his attempt to win his third straight at the Glen, but he also didn't lose his unofficial title of king of the roads.

Elliott arrived at the track as a heavy favourite to win. He started the race, however, with those odds considerably lessened as he was forced to the rear after his car failed pre-race inspection. He also started with crew chief Alan Gustafson booted from the pit box.

But up through the field Elliott came — a couple of times, as an untimely pit stop to replace flat-spotted tires on lap 31 killed his forward run — and with nine laps to go, he passed Truex on the track for second place.

He would close on Larson on the final laps but wound up 2.43 seconds back.

Post-race, Elliott refused to blame the pre-race penalty for his fate. He blamed himself.

“I made too many mistakes to get the win, unfortunately,” Elliott said. “I made it too late in the race. Kind of an uphill battle all day.

“I'll try to clean some things up and make less mistakes next time and maybe it will work out.”

Over those final laps, both Larson and Elliott had to deal with a pack of lapped cars. Larson admitted he was worried that getting past those cars would allow Elliott to move even closer.

“Chase was already catching me pretty quick,” he said, “even with me being on an open track. So when I caught those (lapped) cars, I got into the 38 (car) ... I thought I would look in my mirror and the 9 (Elliott) would be right on me but I think we had a comfortable enough gap where I could make a mistake like that.”

Joe Gibbs Racing's Truex, who won at the Glen in 2017, finished third. Truex, who led a race-best 34 laps, was attempting to win his fourth race of the season.

Christopher Bell of Joe Gibbs Racing also was sent to the rear of the field for the start for failing pre-race inspection. And he, too, moved to the front. He was running second when he was spun in contact with Larson on Lap 55. Bell finished seventh.

“I want to say a big apology to Christopher Bell,” Larson said. “I was inside but I wasn't inside enough. I needed to have the nose a few feet further ahead. I ended up turning him. I hate that.”

The Cup Series will be back on a road circuit next week as racing moves to the Indianapolis Motor Speedway infield course.

Pramac Racing's Jorge Martin secured his first MotoGP win on Sunday at the Styrian Grand Prix that was stopped and re-started after a fireball ...
Motoring
3 months ago

Newey says Red Bull have battled more 'politicking' than ever

Red Bull have battled more behind-the-scenes "politicking" than ever in Formula One this season as they seek to dethrone Mercedes and seven-time ...
Motoring
3 months ago

Formula One stewards will on Monday assess Aston Martin's request for a review of Sebastian Vettel's disqualification from second place at last ...
Motoring
3 months ago