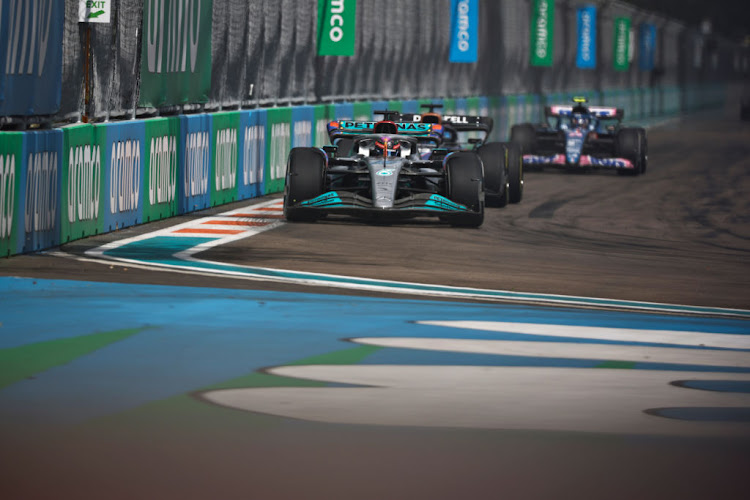 George Russell on track during the F1 Grand Prix of Miami at the Miami International Autodrome on May 8 2022 in Florida.
Image: Chris Graythen/Getty Images

A good Friday turned into a stinging Sunday for Mercedes at the Miami Grand Prix with George Russell and Lewis Hamilton sweating to fifth and sixth place finishes, and under no illusions about how far off the pace they remained.

After winning the last eight constructor's titles, Mercedes are well adrift in third place in the standings, already 62 points behind leaders Ferrari and 56 behind second-ranked Red Bull.

Mercedes had shown signs of better performance in Friday's practice sessions, but that proved to be a false dawn with neither car ever in contention to win on the new South Florida track.

"At the end of the day there is no happy moment. We are third quickest on the road and in a way, in no man's land. We had a good Friday. We need to dissect why that was and then come back," said team principal Toto Wolff.

"This is where we are. We are probably not as quick in qualifying sometimes and we have the outliers. But we go back to where we are and that is behind the Red Bulls and Ferrari," he said.

Russell had started 12th on the grid after a disappointing Saturday and moved up well, eventually getting past his team-mate.

"I think it's mixed feelings because based on where we were yesterday, today was a good result. But if you'd told me after Friday we'd finish P5 and P6 (fifth and sixth) and that far behind P1 (first), I'd have been pretty disappointed," said Russell.

"We have a fast race car in there, we just don't have the key to unlock performance and we don't really understand why that is. There's work to do," he said.

Russell said the bouncing problem the cars have been suffering had been better than in Saturday's difficult qualifying.

"It wasn't much nicer today but because the speeds were lower the aero wasn't working as hard so I could sort of manage it. It's frustrating but I'm sure we'll get there at some point.

"There was one point when I thought 'here we go, we're getting a bit closer', but ultimately those guys are just quicker than us and we need to unlock the performance we have in the car," added the Briton.

Seven-time world champion Hamilton questioned his team asking him to make the decision on whether to return to the pits for softer tyres when the safety car was out.

"In that scenario I have no clue where everyone is and when the team say it's your choice I don't have the information to make the decision," he said.

"That's what your job is, make the decision for me. You've got all the details. That's what you rely on the guys for. Today they gave it (the decision) to me and I didn't understand it," he said.

But Hamilton was trying to keep a brave face on the team's troubles.

"At least we got points, we're finishing, reliability is good. We just have to keep trying. I'm excited to at some stage take a step forward, which we haven't yet," he said.

Engineering Director Andrew Shovlin agreed the team was making the most of a bad situation but said there was no escaping the cold reality.

"It was encouraging to see pit stops and reliability were strong as good operations have helped us keep the points gap to the leaders to a minimum so far this season," he said.

"However, we're under no illusion that we must close that lap time gap in the next few weeks if we are to present any kind of challenge to Red Bull or Ferrari."