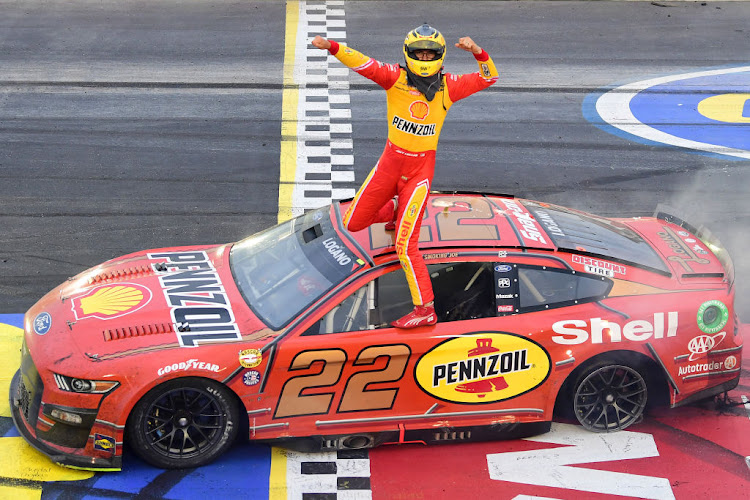 Joey Logano ran down William Byron and bumped him out of the way as they approached the white flag to win the Goodyear 400 NASCAR Cup Series race Sunday on Throwback Weekend at Darlington Raceway in Darlington, South Carolina.

On the race's final restart, Byron stuck low on Logano off turn 2, with Logano's Ford scrubbing the wall and turning the lead over to Byron.

However, Logano's No  22 Ford caught Byron with two laps to go and shoved Byron's Chevrolet in turn 3, loosening him up and sending up the track, which allowed Logano to speed past the No 24 car.

Logano went on to snap a 40-race winless streak with his first victory of 2022.

"You're not going to put me in the wall and not get anything back," Logano said of the final restart and the race-winning contact.

"I've never won here in a Cup race. So proud of this race team."

Byron wound up in 13th and had choice words for Logano after the race.

"He does this stuff all the time. I've seen it with other guys. When he drove in there 10/mph too fast. With these Next Gen cars, he slammed me so hard it knocked the right side off the car and no way to make the corner.

By running the fastest qualifying lap Saturday, Logano secured his 23rd career pole, which was also his first of the season and first at NASCAR's oldest superspeedway.

He opened the 293-lap race around the 1.366-mile, egg-shaped track by watching Kyle Larson immediately take the lead and seeing the first caution fly after Brad Keselowski spun on lap 2.

Larson paced the 90-lap first stage, but he slid off turn 4 while trying to pass underneath Kyle Busch to bring out the third caution period on lap 54. Larson later retired from the race with a last place finish in 36th.

Logano found his way back to the front and held off Ross Chastain for his first stage win this season and first at the South Carolina track.

Martin Truex Jnr passed Logano for the lead and led most of the second stage, but Chastain took the lead on lap 166 when Keselowski wrecked with Busch, forcing the latter driver's No 18 Toyota out of the race.

Chastain's No 1 Chevrolet held the point for a Stage 2 win, and he led Truex, Logano, Denny Hamlin and Byron to start the final 99-lap run to the checkers.

But Chastain's day ended as he wrecked on the restart, and Hamlin positioned his No 11 Toyota up front – only to be passed by Logano on the next restart.

With 33 laps to go, an eight-car melee occurred when Truex slid back on the restart and started a wreck off turn 2 from sixth on back.