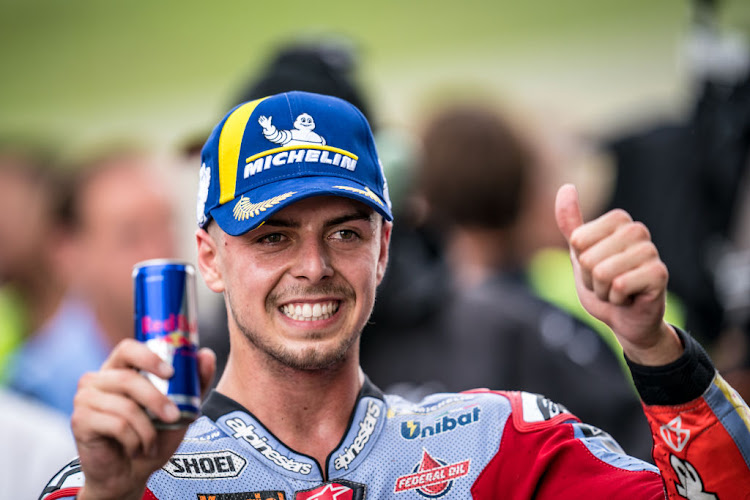 Thumbs up for Fabio Di Giannantonio of Italy and Gresini Racing MotoGP after he won the pole position during the qualifying practice of the MotoGP Gran Premio d’Italia Oakley at Mugello Circuit on May 28, 2022 in Scarperia, Italy.
Image: Steve Wobser/Getty Images

Gresini Racing's Fabio Di Giannantonio claimed his first MotoGP pole position in front of his home crowd at the Italian Grand Prix after finishing on top in Saturday's qualifying session at Mugello, which was briefly red-flagged due to a crash.

Gresini rookie Di Giannantonio took the top spot in the first qualifying session under light rain and the Italian maintained his pace in Q2 in tricky conditions.

He finished with a time of one minute and 46.156 seconds, 0.088 seconds ahead of compatriot and fellow rookie Marco Bezzechi of Mooney VR46 Racing Team, which is owned by MotoGP great Valentino Rossi.

“If I wished for a perfect Saturday, I think here it is,” Di Giannantonio said.

“What a feeling, that's amazing! My first MotoGP pole, here in Mugello to have it with Ducati, Tifosi (fans), it's unbelievable.

“I thought I could be really fast on the dry (track) but then came the tricky conditions, so it was difficult. But I was fully committed and focused and had an incredible lap. I'm super happy.”

Reigning world champion Fabio Quartararo was sixth on his Yamaha.

The Q2 session had a short stoppage for a cleanup after a minute and 10 seconds from the start when six-time MotoGP champion Marc Marquez suffered a huge high side on Turn 2, with his Repsol Honda bike catching fire.

Before the qualifying sessions, MotoGP retired Rossi's number 46 from the championship in a ceremony.

Rossi won nine world titles, including seven in the top tier, before he called time on his career last year after a quarter of a century in grand prix racing.