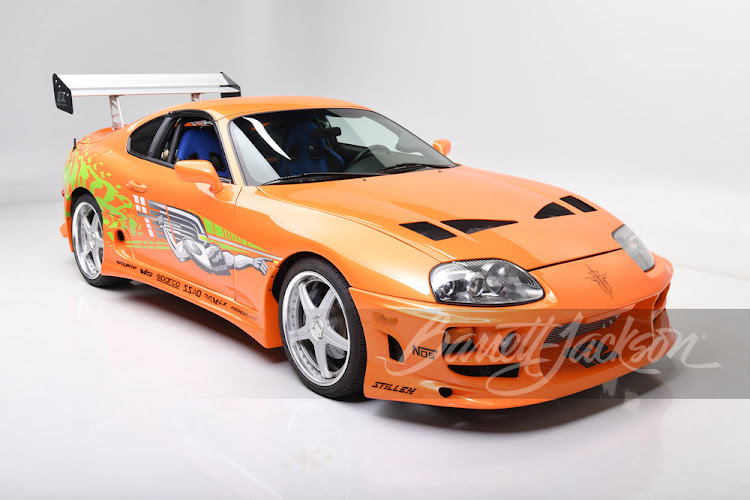 This iconic Mk4 Toyota Supra driven by Paul Walker in "The Fast and The Furious" was sold for over R8-million at a Barrett-Jackson auction in Las Vegas over the weekend.
Image: Barrett-Jackson

Remember the Mk4 Toyota Supra that appeared in the first two Fast and Furious movies? Of course you do. Piloted by the late Paul Walker, this Japanese sportster became the stuff of cinema legend: a celluloid icon to rival the likes of Nicolas Cage's Shelby GT-500 (aka Eleanor) that thrilled audiences in the 2000 remake of Gone in 60 Seconds. Anyway, at a Barrett-Jackson auction in Las Vegas over the weekend one of these famous Toyota movie cars was sold for $500,000 plus $60,000 in auction fees (a sum of roughly R8m).

According to the Barrett-Jackson listing, this example was built by renowned Hollywood movie car builder Eddie Paul at The Shark Shop in El Segundo, California, for the first movie (where it featured in multiple interior and exterior shots), and then brought back and modified for its role as “Slap Jack's Supra” in the 2003 sequel, 2 Fast 2 Furious.

This particular example comes with a factory-fitted 2JZ-GTE 3.0-litre turbocharged inline-six engine mated to a four-speed automatic transmission. The latter was chosen over a manual as it makes the car much easier to drive and modulate during shooting.

If you’re a fan of a certain three-letter badge that has been applied to Volkswagen hot hatches since 1976, you’ll be well aware that the new Golf 8 ...
Motoring
1 year ago

Buying a car is a big investment. Follow this advice to avoid disappointment
Motoring
1 year ago