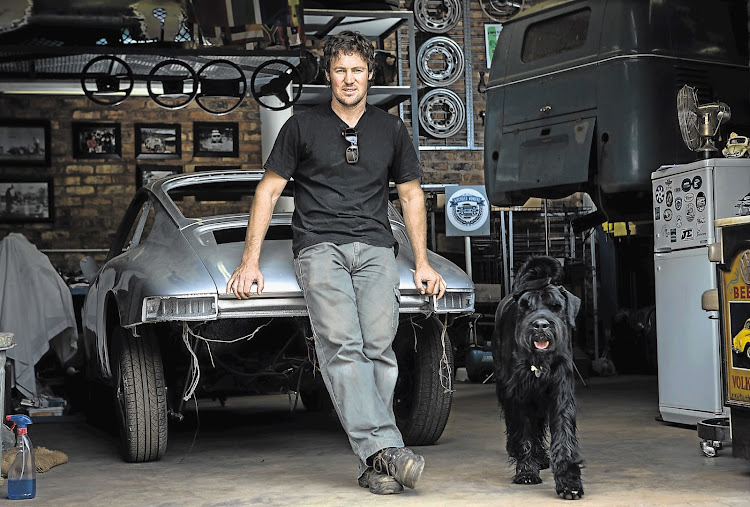 Wernher Hartzenberg is a man of many automotive obsessions. And if you are ever invited for a tour of his workshop tucked away behind a medical centre in Pretoria East, you’ll discover that one of them has to do with classic air-cooled Volkswagens.

The evidence is everywhere. A 1957 Kombi that is being sandblasted. Some old Beetle engines patiently waiting for a new donor car. Badges and pictures and other fragments of memorabilia tacked up on walls or stacked atop shelves. It is a shrine to everything German and not fitted with a radiator.

The bug bit hard because Hartzenberg found himself addicted to the car and its history. After taking part in the inaugural African Beetle Marathon, he co-drove a 1959 Kombi from Joburg to Norway.

“My love affair with air-cooled cars kept on growing. I was blown away by what they were capable of doing.”

After this Scandinavian trek ended, Hartzenberg moved to North America where he coached tennis for 10 years. When he finally came home in 2010 his father turned him on to another air-cooled institution.

“My dad has owned Porsches all his life,” says Hartzenberg.

“He’s been buying and selling them for as long as I can remember. And when I came back he decided to get back into the scene because he hadn’t owned one for a number of years.”

The Porsche his father purchased was a 356: the curvy predecessor to the iconic 911.

“It rubbed off on me. I started appreciating where the Porsche came from, which is exactly the same place the Beetle came from. They’re the same car in my mind, built by the same people.”

Crackling with newfound enthusiasm, Hartzenberg decided to turn his passion into a business. After restoring his grandfather’s Beetle he founded Air Cooled Wonders and started working on more ambitious projects. Like the silver Porsche 911 that’s sitting inside his workshop.

“I’ve done a course in sheet metal shaping down in Cape Town. But actual experience is where you learn the most. Although I also look up to people like my friend Werner Alker. He’s a 70-year-old German gentleman who has been working on Volkswagens since he was 13. He has been a great friend and mentor. Mechanically speaking he has taught me everything I know about the original Beetle and Porsche 356.”

But knowledge and know-how is not all these curators of air-cooled cars have handed down to Hartzenberg over the last few years. From hanging out in these circles he uncovered a fascinating story involving one of the most sought-after cars Porsche ever made: the infamous 550 Spyder .

Built in 1953 in limited numbers (only 90 were made), this low-slung sportster was a machine you could race on Sunday and then drive around town during the week. It was ideal for well-to-do gentleman racers of the era. It is also the car that James Dean was killed in, just nine days after he took delivery of it. As a result the  Spyder has always carried something of a stigma. Which is a pity because behind all the bad press lurked an accomplished race car. One that certainly tasted more than its fair share of champagne during the golden age of SA motorsport.

Hartzenberg tells me that back in 1958 a local petrolhead named Ian Fraser-Jones imported one of these Spyders. He raced it for a while and then sold the car to a doctor-come-racing-driver named Dawie Gous in 1960.

“Gous drove the Spyder in the annual [Kyalami] nine-hour endurance race with John Love that year. And they won.”

They went on to win it again in 1961. Then in 1963 Gous put his Porsche up for sale. One Peter Engelbrecht bought it, and later the same year it crashed during the nine-hour. 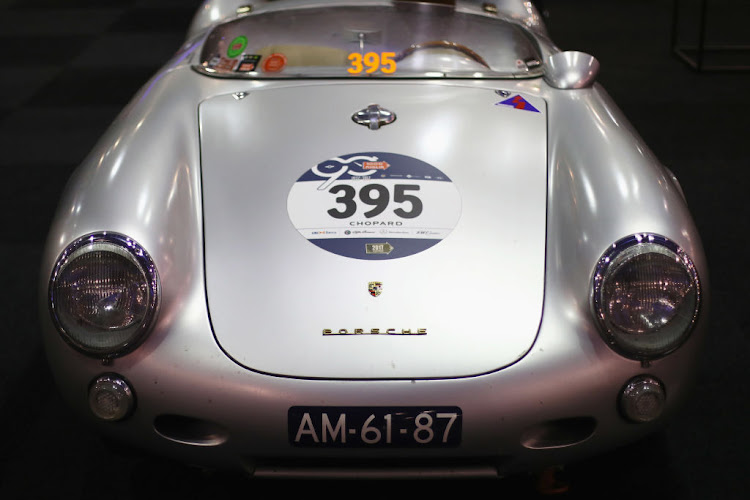 A Porsche 550 Spyder similar to the one that went missing in Johannesburg.
Image: Dean Mouhtaropoulos/Getty Images

“Apparently the accelerator got stuck and he went into an embankment. There are pictures of the car burning. What happened to the car in the next few years, I don’t know yet. But it basically disappeared from the scene and did no racing.”

Then in 1966, like a wounded phoenix staggering from the ashes, the  Spyder  turned up at a second-hand car lot in Vereeniging. “It was worth nothing,” says Hartzenberg. “No-one wanted to buy an accident-damaged car like that.”

But somebody did. Desperate for a crack at the track, Paul Richards, 21, was high on enthusiasm but low on cash. The perfect candidate for a cut-price Porsche that was still capable of considerable pace.

“He was warned by more than one person to not underestimate the power of that car.”

Richards took delivery and started practising for what would be his first and last race at Kyalami. After bogging down at the start, the rookie driver was pushing hard to make up for lost time. He lost control and slammed into a pole at the old Jukskei sweep on the very first lap.

“As far as I know, he was killed on impact,” says Hartzenberg.

What happens next is even more intriguing. All the usable, serviceable parts were stripped from the wreck and given away. What remained of the mangled Spyder was promptly disposed of; hidden for all eternity.

“His stepdad was distraught,” says Hartzenberg.

“I don’t think he knew that his stepson was actually racing the car. Anyway, to make sure that the Porsche never went near a racetrack again, he buried it underground. And rumour has it that a building got built on top of it.”

It’s an enthralling story, a mystery that drove Hartzenberg down a long road of investigation.

“It’s rather like the James Dean Spyder that disappeared. I mean everybody wants to know what happened to it. So I became obsessed with this car because it’s the most famous Porsche that ever raced in SA.”

Along the way he met Al Gibson: a 92-year-old mechanic who serviced the Spyder when Gous owned it.

“He was a huge part of this car’s success. If it were not for him then Gous would never have won those two nine-hours. He was the guru.”

Gibson happened to own a set of the car’s wheels, a bucket of its spent engine components, plus the original owner’s book stained with the oil drips of late-night fettling sessions. These are the only identifiable remains of the doomed Porsche and they’re now proud centrepieces of Hartzenberg’s workshop.

It’s anyone’s guess where the car may be. While some mutter about Braamfontein, others speculate that it lies beneath the old Nestlé offices in the Randburg CBD.

“People will tell you that it’s under this or that building, but I’m really not sure,” Hartzenberg says.

“If I knew I would have gone there by now. But it is somewhere in Joburg. I don’t know, I think it’s better for the car to stay where it is.”

He’s right. Not just because there probably isn’t much left of it any more; no, because the fantasy, the idea that this rare Porsche is lying silently listening to our footsteps, far outweighs the reality.

Manufacturers are setting the limits progressively higher as the years trot by. When I refer to limits I’m referring to that magical envelope where ...
Motoring
1 month ago

Most established motoring journalists have long-term test cars. I had one once. It was a 2013 Honda CR-Z and it arrived at my office with 200km on ...
Motoring
2 months ago

The Citroën 2CV is to France what the VW Beetle is to Germany: a cheerful budget banger that was designed to mobilise the masses after years of ...
Motoring
2 months ago