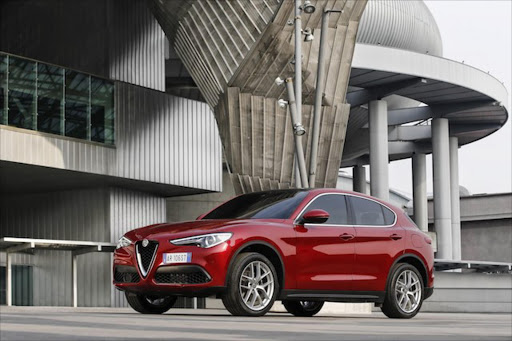 Alfa Romeo Stelvio Super
It’s not the range-topping Stelvio Quadrifoglio, but at half the price the Stelvio Super has its virtues and is a blast to drive, writes Thomas Falkiner

Hold on. Young Brenwin Naidu wrote about this car two weeks ago in our Lifestyle supplement. What gives?

Well, yes and no. The Stelvio Naidu waxed lyrical about was the range-topping Quadrifoglio model, which, let’s be honest, isn’t something many of us will be able to afford. The one I’m writing about is the Stelvio Super: the common garden version that packs less power but also costs more or less half the price.

Fair play. So does “common garden” translate to slow and insipid?

Far from it. Alfa Romeo tucked its now familiar 2.0-litre turbo engine under that long and deliciously swooping bonnet. In the Giulia sedan this motor makes 147kW but here the engineers turned the wick right up to 206kW, which is a rather substantial increase. With maximum torque peaking at 400Nm this means that the Stelvio Super is actually a deceptively fast albeit thirsty (I couldn’t get it under the 10l/100km mark) machine.

Dial the Alfa DNA drive mode selector to “dynamic”, stomp heartily on the accelerator pedal and this burly SUV races on down the tarmacadam at a pace on par with most hot hatches. I was also impressed with the rapidity of the eight-speed, ZF-sourced transmission. Found in everything from BMWs to Jaguars, this gearbox might not be of the fancy dual-clutch breed but manages to fire through cogs with damn near as much urgency.

I spot a “Q4” badge sitting proud on the tailgate. What does it mean?

Okay, so Q4 is basically marketing code for Alfa’s trick all-wheel-drive system. And it’s quite a good one because most of the time it keeps 100% of the drive at the rear axle — where it should always be. Only if road conditions become especially greasy, or if the system senses that the rear wheels are running short on traction, will it transfer torque (up to 50%) to the front axle.

Out in the real world it works surprisingly well: the Stelvio feeling rear-wheel biased in dry conditions but then nicely planted when the Joburg heavens unleash their wrath.

Talking of rain — I’ve heard that most Alfa models break down when wet.

Maybe back in the 1970s but today most Alfa Romeo models are quite happy to chug through the odd Highveld thunderstorm or two without any drama whatsoever. Indeed, build quality and reliability have been improved immensely over the past few years. Though having said this there were some parts of the cabin that I did feel were a bit low rent considering the car’s price tag.

Things like the door cards, some of the switchgear and that scrolly, BMW-iDrive-aping infotainment wheel looming especially large on the centre console. Yeah, there’s a lack of premium polish and overall attention to detail that you’d find in rival products made by Audi, Porsche or Jaguar. The driving position is decent and eerily sedan-like and equipment levels are generous.

You can look forward to Bluetooth connectivity, automatic climate control, satellite navigation plus a big 8.8-inch colour screen on which to control it all. Unfortunately neither Apple CarPlay nor Android Auto is present. Which kind of sucks considering you can enjoy this integration inside a Kia Picanto — a car that is a zillion times cheaper.

I remember you were impressed with how the Giulia handled. Is the Stelvio as good to pilot?

Absolutely. This is where the Stelvio impressed me the most as Alfa Romeo has managed to make this thing a real blast to drive. With its excellent chassis and sporty yet supple suspension, it rips through corners with the voracity of a well-sorted sports sedan. In fact I’d say it felt very much like a tall Giulia in the way it dispatched with corners, which is quite a feat.

While there’s a glut of mechanical grip courtesy of those sticky 18-inch gumballs propping up each corner, the steering setup (much like in the aforementioned Giulia) has been tuned to be both rapid and extremely direct. It’s a very easy car to place and it turns into corners with a keenness that belies its size. Is it as good a Porsche Macan, then? Well, dynamically speaking I’d say that the Stelvio is every bit as accomplished. – Thomas Falkiner