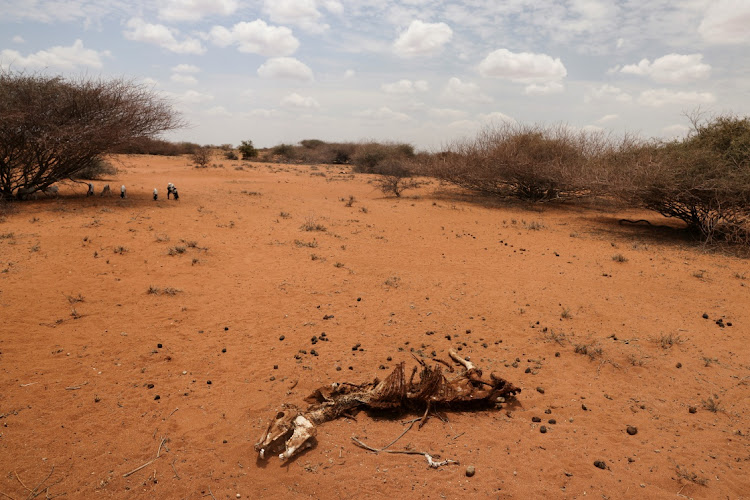 Some 7.1 million Somalis or nearly half the population face acute levels of food insecurity, meaning they will be barely able to get the minimum calories they need and might have to sell assets to survive.
Image: Baz Ratner/Reuters/ File photo

Nearly a quarter of a million people are facing starvation in Somalia as a drought worsens and global food prices hover near record highs, United Nations agencies said on Monday.

The agencies said a fourth consecutive rainy season had failed in the Horn of Africa country and meteorologists were warning of another below-average rainy season later this year as the world's climate becomes more erratic.

At the same time, world food prices are close to record highs hit in March as the Russia-Ukraine war roils markets for staple grains and edible oils.

Around 213,000 Somalis are at risk of starvation, a near three-fold increase from levels expected in April, according to the statement from the World Food Programme (WFP), the Food and Agriculture Organization (FAO), the children's agency Unicef and the Office for the co-ordination of Humanitarian Affairs (OCHA).

They said some 7.1 million Somalis or nearly half the population face acute levels of food insecurity, meaning they will be barely able to get the minimum calories they need and might have to sell assets to survive.

“The lives of the most vulnerable are already at risk from malnutrition and hunger, we cannot wait for a declaration of famine to act,” El-Khidir Daloum, the WFP's country director in Somalia, said.

Around 3 million livestock have died in Somalia due to the drought since mid-2021, the agencies said.

The UN's 2022 Humanitarian Response Plan is only 18% funded to date, and Somalia is competing with other global emergency hotspots for funding as food insecurity spreads around the world, the agencies added.

In 2011, famine conditions killed an estimated quarter of a million people in Somalia.