While Ford Kugas were going up in flames on South African roads in December‚ at least one New Zealand Kuga owner has had the same experience. 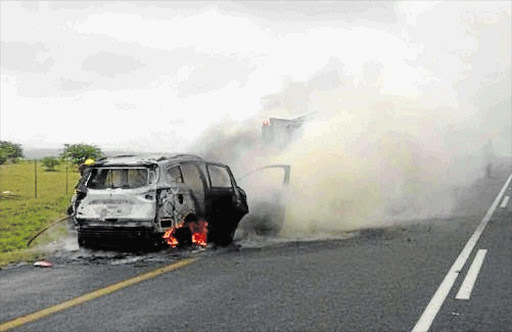 UP IN SMOKE: A Kuga on January 6 2017 on the R63 between King William’s Town and Dimbaza. File Photo
Image: FACEBOOK

TV-NZ broadcast news of Eden O’Connor’s December 16 Kuga-on-fire experience on Thursday‚ making reference to the numerous Kugas of the same model - the 1.6-litre petrol engine - which have gone up in flames in South Africa‚ and the safety recall of 4 556 vehicles built between 2012 and 2014.

The segment included footage of Maria Daniels of Port Elizabeth’s Kuga on fire at the side of the road‚ with an anguished spectator screaming “Get away from the car!”.

Her vehicle caught fire on the New Year weekend after she had taken it in to a Ford dealership for a safety check to avoid engine overheating‚ which Ford SA later said had not actually been done.

O’Connor’s Kuga was a 2013 model‚ and it was serviced just before the incident. There were three children in the back seat when the vehicle caught alight.

It would appear that Ford in New Zealand has not alerted its dealerships or Kuga owners in that country about any fire-related risks.

Ford New Zealand’s communications manager‚ Tom Clancy‚ was quoted in New Zealand media as saying that the case was being investigated and that it was a “major concern”.

“If there is a safety defect found‚ we will move very quickly on behalf of all our customers‚” he said in a message reminiscent of the official response Ford SA gave until the National Consumer Commission forced the company to announce a safety recall in mid-January.

TimesLive asked Ford SA if the 1.6-litre Kuga which was sold in the New Zealand was made in the same Spanish plant as the problematic 1.6 model sold here and whether the company knows of any other Kuga fires in markets outside of South Africa‚ but hadn't received a response at the time of writing.