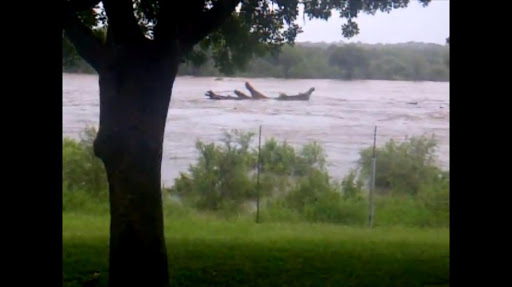 "A few tents were damaged, but our tourism facilities stood the test of the flood," chief executive David Mabunda said.

Water pumps and pipelines along river banks were damaged, but the park's engineering team was already working to restore the water supply to affected areas.

No deaths or serious injuries were reported, although six foreign tourists -- four Italian and two British -- were washed away in their car near Hamilton tent camp, he said.

The tourists were taken to doctors at Skukuza for treatment.

In the north of the park, 26 people remained cut off and rangers were re-routing them to safety.

Another 22 people remained trapped at Biyamiti camp -- one of the smaller accommodation sites.

Some guests who were trapped in cars had been rescued by Thursday morning. SANParks had kept their families updated on the situation.

Mabunda said no animal casualties or fatalities had been reported.

It appeared that the wildlife had sensed the approaching danger as most had migrated to higher ground days before.

Anti-poaching measures continued despite the floods, and Mabunda warned poachers that the wet ground would make it easier for rangers to track them.

The heavy rains were a "large infrequent event that tests the resilience of the ecosystem".

Positive effects of the flood were that previously dry areas were hydrated, while sediments and invasive plants were washed away.

Aquatic species were also afforded the opportunity to recolonise by the unusual conditions.

"Nature has replenished itself... events like this recharge the environment," Mabunda said.

In terms of future tourism revenue, the flood was likely to have a positive effect because "whenever an event of this nature occurs, we usually get more visitors".

Early projections from the chief engineer indicated that the park infrastructure would be completely fixed within six months, he said.

The Talamati, Buyamiti, and Shimuwini camps were still cut off, spokesman Reynold Thakhuli said in a statement on the SANParks website

The Talamati and Balule camps were flooded, while six tents at Lower Sabie had to be evacuated.

At Skukuza, a staff house was flooded and the indigenous nursery was damaged, but the water level had come to rest on the boundary fence. No serious damage had been reported at the rest camp.

The road between Skukuza and Tskokwane was still closed with the high level bridge intact, but blocked by debris.

The Crocodile Bridge road remained shut, but the rest camp of the same name was undamaged as the water had stopped rising 50m from the fence.

All gravel roads south of the Letaba River were still closed.

On Wednesday, precautionary evacuations were carried out in low-lying areas, including staff accommodation and river-view chalets.

Some guests had to be evacuated to accommodation outside the game reserve.

Department head David Mahlobo and Nkomazi mayor Thuli Khoza had conducted an assessment of flood damage in Nkomazi, he said.

"Fourteen families have been affected and need reallocation, while 16 families were affected without needing to be relocated," Kunene said.

All the families would receive food parcels and blankets.

The municipality posted signs to redirect traffic on roads and bridges deemed unsafe after heavy rains on Tuesday and Wednesday.

Kunene said his department would engage with the department of public works and the SA National Roads Agency Limited to repair damage, such as debris and potholes caused by the flood.