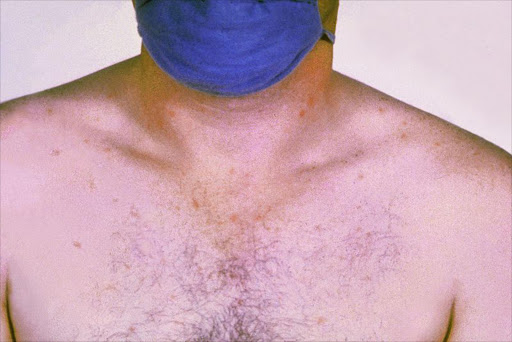 Rose spots on the chest of a patient with typhoid fever due to the bacterium Salmonella typhi. Symptoms of typhoid fever may include a sustained fever as high as 103° to 104° F (39° to 40° C), weakness, stomach pains, headache, loss of appetite. In some cases, patients have a rash of flat, rose-coloured spots.
Image: CDC

At least 90 people were admitted to hospital and over 600 affected in a typhoid outbreak in the Zimbabwean capital Harare, a health official says.

"We have attended to over 600 cases in Kuwadzana alone," city health director Prosper Chonzi was quoted as saying in the state-owned Herald newspaper.

"We have confirmed that the disease is typhoid. We have not recorded any deaths. We have over 90 patients admitted at the Beatrice Infectious Diseases Hospital."

Typhoid thrives in areas that do not have proper sanitation.

Some suburbs go for weeks without running water as Zimbabwean municipalities battle to keep up services.

Last October, over 6,000 cases of diarrhoea were reported in the southern towns of Masvingo and Kadoma and children were the worst affected.

Four years ago over 4,000 people died of cholera in an outbreak which affected nearly 100,000 people.