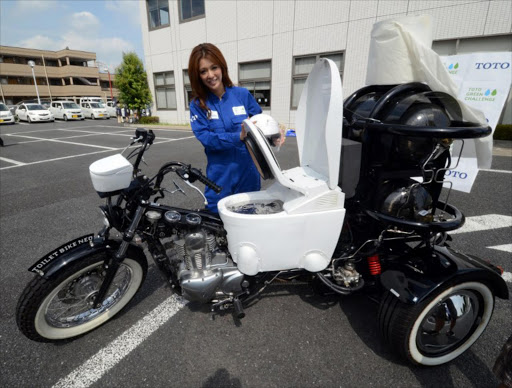 A female rider drives Japanese toiletry goods maker Toto's eco-friendly motorcycle "Toilet Bike Neo", which uses bio-gas from discharges of livestocks or waste water during a demonstration run for their domestic green campaign in Omiya, suburban Tokyo on August 29, 2012. Toto made a demonstration of a Toilet Bike, a motorcycle equipped with a toilet bowl which moves on biogas that are, not made from a driver's wast but from livestocks'.
Image: Yoshikazu TSUNO

Japan's best-known toilet maker on Wednesday unveiled a "poop-powered" motorcycle that can travel as far as 300 kilometres on a tank filled with animal waste.

Billed as the world's first waste-powered vehicle, the three-wheeler has a toilet in place of a regular seat and huge paper roll at the back.

But as a young female model climbed aboard for a test drive Wednesday, toilet giant TOTO was quick to point out that she would not supply the "gas".

"The biogas it uses as fuel is not made from human waste. It's made from livestock waste and sewage," Kenji Fujita, a company spokesman, told reporters in a Tokyo suburb.

"We hope to raise awareness among customers about our green campaign through development of environmentally-friendly products such as water-saving showerheads and water-saving toilets," Fujita added.

The company – which makes toilets equipped with an array of features including heated seats, water jets with pressure and temperature controls, and ambient background music – has no plans to commercialise the motorcycle.