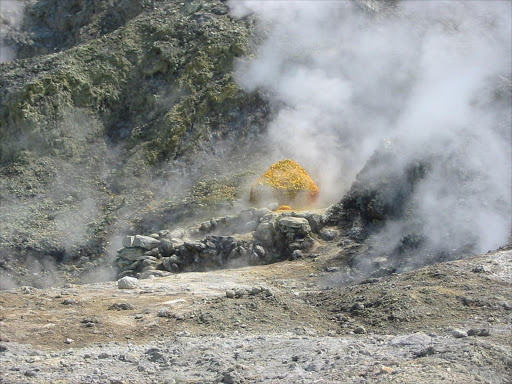 A restive "super volcano" west of Naples is raising nervousness in the local Italian population.

The ground of the Campi Flegrei ("burning fields"), also known as the Phlegraean Fields, has risen more in recent weeks than it has in a long time.

This does not necessary indicate a heightened risk of an eruption, however, says Thomas Wiersberg, a scientific drilling expert for the German Research Centre for Geosciences (GFZ) in Potsdam.

The Phlegraean Fields are a large caldera, or volcanic crater, lying mostly underwater off the Italian coast. The caldera is thought to have been formed by a massive eruption some 35 000-40 000 years ago.

The last major eruption in the fields of boiling mud and sulphurous steam holes, one of a few dozen super volcanoes worldwide, occurred in 1538.

Wiersberg is part of an international research team that began drilling into the ground not far from the caldera last summer to monitor possible early warning signs of an eruption.

The team has drilled a pilot hole to a depth of 500 metres but no data has been gathered yet, Wiersberg said in an interview with dpa.

Italy's Deparment of Civil Protection recently raised the alert level for the Phlegraean Fields, where Wiersberg said the ground was rising by about three centimetres a month.

There are concerns that a magma chamber under the fields - presumably connected to the one under Mount Vesuvius, east of Naples - is filling up, the rising pressure possibly heightening the danger of an eruption.

As Wiersberg pointed out, however, the two episodes of considerable ground uplift since the 1960s were not followed by an eruption. The uplift in the early 1970s - about 1.50 metres in three years - was somewhat greater than the current one, he said.

"Many houses cracked," after which the ground deformation sharply subsided, Wiersberg said. "But it's true that the uplift has increased again during the past two or three months."

An eruption could have serious consequences for the heavily populated region with knock-on effects for the whole of Europe. There could also be worldwide impact, for example in the form of climatic changes.

No forecasts have been made thus far. Since super volcanoes seldom undergo massive eruptions, empirical data is lacking. "It's easy to assert there'll be an eruption sometime. That doesn't help us, though. We need more specific information," Wiersberg said.

He said the drilling project aimed in part to monitor the Phlegraean Fields over the long term and gain more knowledge of what had occurred earlier in the super volcano.

"First we've got to understand what's happening under the surface," Wiersberg said. Then it may be possible to say more about the likelihood of an eruption.

Fears of nearby residents - and some scientists - that the drilling could "awaken" the super volcano have proved to be unfounded.

"Technically, everything went smoothly. No additional volcanic activities were triggered, nor were there any problems with gases or fluids," he noted.

It has not yet been decided when the scientists will continue their project and begin drilling to a depth of 3 kilometres. "At the moment it's mainly a financial question," Wiersberg said. "There'll be deep drilling when Italy provides the necessary funds."