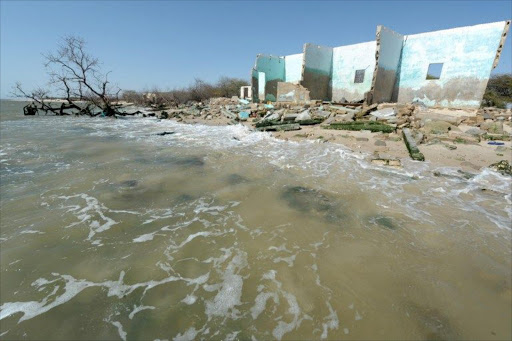 Ruins of houses on the beach of the village of Doun Baba Dieye, northern Senegal. Doun Babe Dieye, settled by the Normans in 1364, was the first casualty among many districts of the Senegalese city of St Louis, the former colonial capital of French west Africa which, little-by-little, is disappearing underwater.
Image: SEYLLOU / AFP

Ameth Diagne was asleep when the first waves lapped at his back door, the lukewarm, salty water seeping into his bedroom an impassive portent of the final days of his 650-year-old fishing community.

He had kept his two wives and many of his 16 children with him long after the neighbours had fled, in the vain hope that his once-bustling, tenacious west African village could survive the remorseless advance of the Atlantic Ocean.

"My house used to be two kilometres (1.2 miles) from the sea. I could grow things here because there was fresh water which came from the river," Diagne said, surveying a stretch of wet sand and rubble which, until last year, had been his living room.

Doun Babe Dieye, settled by the Normans in 1364, was the first casualty among many districts of the Senegalese city of St Louis, the former colonial capital of French west Africa which, little-by-little, is disappearing underwater.

Diagne, 52, and his 760 neighbours had made their living from the precious mullet, sardines, bonga and tilapia which populated the mangroves but have left since the salt water of the Atlantic began encroaching into the Senegal River.

"It was a beautiful village with lots of greenery everywhere," recalled Diagne, a fisherman since leaving Koranic school at the age of 12, and the last to leave when the sea claimed his village of around 40 houses last year.

"I'm sad that I had to go because I lived on fishing. Life was simpler. Now I cannot teach my children what my ancestors taught me -- knowledge of the sea, fishing, fauna and flora," said Diagne, one of the lucky ones who had enough money to build a new house further inland.

An archipelago in the mouth of the Senegal River often referred to as the "Venice of Africa", St Louis is anchored precariously between the fast-flowing currents of the swollen waterway and the fearsome breakers of the Atlantic.

Named after Louis XIV, in 1659 it became the first French settlement of l'Afrique-Occidentale, trading in slaves and gum arabic.

A four-hour car journey from Dakar through baobabs and palm trees, the UNESCO World Heritage site remains a major pull for well-heeled Westerners who come to sample its rich colonial heritage.

Women in grimy dresses and headscarves swap jokes and sip tea in its 19th century courtyards while weatherbeaten men lean against the disintegrating plasterwork of 1920s Art-Deco houses and watch the world go by.

The economy has declined since the shift of rule to Dakar but there is still a vibrant fishing economy and the pungent tang of drying Nile perch spread on nets by the river is unmistakable.

In 2008, Alioune Badiane of the United Nations' UN-Habitat agency designated St Louis as "the city most threatened by rising sea levels in the whole of Africa", citing climate change and a failed 2003 canal project as the cause.

The city is plagued by flooding during the rainy season when the river overflows and scientists say climate change is exacerbating the problem with increasingly heavy rain and a rise in the sea level.

Thanks to large scale urbanisation, two-thirds of the 250 000 residents are exposed to floods, with 70 percent of households in the poorest areas having no regular waste collection and less than a tenth having sewer connections.

"If things keep going the way they are the whole city of St Louis will have to be moved, but it's a possibility we do not want to contemplate," the mayor, Amadou Abiboulaye Dieye, said in an Open University film he made on the city.

The heart of the old colonial city is protected from the rolling waves of the ocean by the Langue de Barbarie, a slender, 17-kilometre spit of sand which is home to 80,000 people, a population density found nowhere else in Africa.

In 2003, heavy rain in the drainage basin of the Senegal River alarmed the authorities who feared the water would rise above critical levels and so dug a new outlet for the river water across the spit.

The channel was about 100 metres (328 feet) in length and 4 metres wide but grew rapidly in the first days as the sea flooded into the river mouth and continued to widen to more than 2 kilometres across today.

Within a year the beach at Doun Baba Dieye, situated opposite the new river mouth, had eroded rapidly, causing Diagne and his neighbours to fear the worst.

"All the villages that were in front of the channel, such as Doun Baba Dieye, have suffered the effects of an intense erosion because these villages were protected from the sea by the Langue de Barbarie," Boubou Aldiouma Sy, a geography lecturer at St Louis' Gaston Berger University, told AFP.

"Today, the village of Doun Baba Dieye has completely disappeared and villages to the south are progressively more threatened as the breach is migrating south."

In a few weeks the rains will come again, bringing more flooding, sewage, disease and misery.

With each storm season more worrying than the last, experts like Sy believe St Louis has to live up to the comparisons with Venice and emulate the Italian city's success in turning water to its advantage.

"St Louis can choose to do the same, at the same time solving some of their most urgent water-related problems -- managing the drainage problem and reducing the flood risk," a 2011 report for UN Habitat said.

"If water is approached as an opportunity instead of an enemy that needs to be combatted, then St Louis can make a strong statement to the world, similar to what the Venetians did a long time ago: use the water dimension as a unique selling point and fully integrate it in short and long term urban planning."