Study lends weight to 'Hobbits' of Flores as a different species 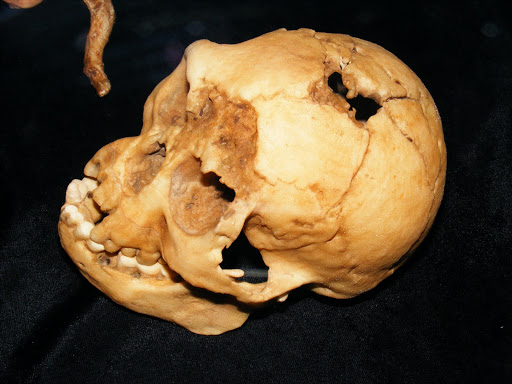 Top view of a cast of the LB1 skull.
Image: Ray from Queens, USA / Wikipedia

When small humanoid fossils were discovered on the Island of Flores a debate erupted over whether they were a new species descended from Homo Erectus, or simply deformed humans.

A new study published in the online journal PloS One sought to add its weight to settling this debate.

The researchers wrote that "the most complete specimen, LB1, has been labelled with a variety of potential pathological conditions, including microcephaly, congenital hypothyroidism, and Laron syndrome."

In order to test whether this explanation held up, the scientists decided to do a 3D analysis of the specimen, and compare it to known cases of people suffering those conditions.

"Firstly, the shape of the LB1 neurocranium is very different from those of humans with Laron syndrome and ME hypothyroidism," the scientists noted.

The researchers also found that while the skull superficially resembled that of someone suffering microcephaly, but then so did that of Homo Erectus.

They found that there were some differences between the specimens, and that where microcephalics differed they did so in different ways that more resembled modern humans.

"Therefore, our results confirm earlier studies of both ectocranial and endocranial morphology of LB1, which found it to be distinct from modern human microcephalic conditions on the basis of much smaller pathological samples," the scientists wrote.

"This study demonstrates that the shape of the LB1 neurocranium is outside the ranges of variation documented here for the ME hypothyroidism specimens and distinct from the specimen with Laron syndrome – strongly suggesting that neither condition is the underlying factor explaining LB1's neurocranial shape."

"Our analyses corroborate the previously suggested link between LB1 and fossil Homo and support the attribution of this specimen to a distinct taxon, H. floresiensis," the scientists concluded.