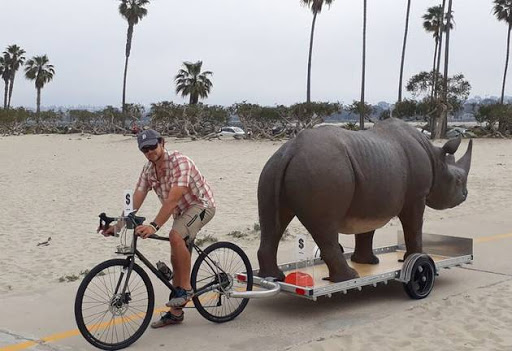 Matt Meyer will be cycling along the US west coast for two months with a life-size rhino replica in tow.

His journey with Lunar started on April 17 in the US state of Washington and he was inspired by Nelson Mandela's Long Walk to Freedom.

He hopes that someday life-size rhino replicas - such as his - will not be the only way humans will get to see these animals.

Meyer‚ a professional safari guide‚ is determined to move mountains by raising awareness of the plight of the endangered creatures.

On his website he mentioned that his "Long Ride to Free Them" was also inspired by Anton Fouche. Fouche walked around South Africa pulling a rhino replica‚ weighing more than 10kg‚ to raise awareness about poaching.

Meyer and Lunar's journey‚ which will end in San Diego‚ involves visiting schools to teach young people about the importance of the rhino. He chose the US because nothing of this nature had been undertaken in that country.

He has already made headlines abroad. According to the Orange County Register he is hoping to raise $250‚000 and has managed to collect $90‚000 to date.

“I don’t have children of my own‚” he was quoted on the website as saying. “But I have nieces and nephews and I couldn’t let them inherit a planet without rhinos.”

The money will go to several organisations including a rhino sanctuary that rehabilitates orphaned rhinos and releases them into the wild.