Scientists turn to Antarctica for answers to global warming 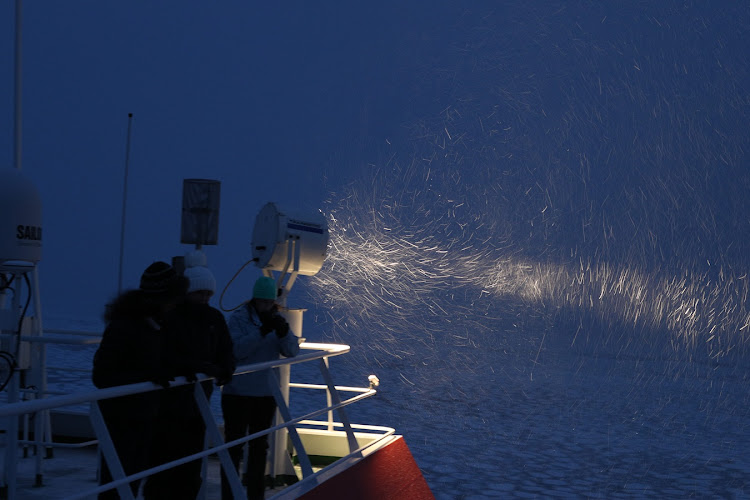 Some 70 scientists‚ a marine expert and an artist from UCT recently returned from a trip to Antarctica.
Image: Niall Perrins

What is happening to the sea ice in the Antarctica?

Returning from a recent trip‚ funded by the Department of Science and Technology‚ with some 70 other scientists‚ a marine expert and an artist from UCT have come home with some harrowing information – and beautiful imagery to explain why we should care.

It is all about pancake ice – frozen discs which look like puzzle pieces floating in the Southern Ocean around Antarctica in a region between the Atlantic and the Indian oceans that was never explored before in winter.

Associate Professor Marcello Vichi‚ who is head of the Marine Research Institute at UCT and led the expedition‚ says what they discovered there is “not something I would have believed until I saw it myself”.

What the scientists found: Unexpected changes in the sea ice features.

He explains: “The formation of Antarctic sea ice is largely regulated by the heat coming from the ocean. The warming of the upper part of the ocean in the last century has been … affecting sea ice.”

This year has seen the lowest value of sea ice area ever recorded in 40 years (28% lower than average)‚ and the rate of sea ice retreat has been the quickest ever observed (46% faster than the mean rate in spring).

“This tells us how quickly huge features of the sea ice can be moved by atmospheric events. We expect ice fragments‚ and we expect them to move – not like this‚” he says.

Being out there in the pancake ice itself is no mean feat‚ but this “very peculiar and weirdly shaped” ice is highly valued for research.

The scientists deployed buoys to measure movement and direction‚ and they were also able to ‘core’ some of the pancake ice (take out a tube-like cross section in the same way one would do for a biopsy on a patient) to analyse its structural properties.

Pancake ice is rarely found up north in the Arctic‚ and is “highly inaccessible” in the Southern Ocean‚ and also‚ because the fragments are small‚ you can’t just walk on them to explore them like you can with pack ice.

So‚ despite its value for research‚ it is symbolic of a major knowledge gap.

For artist and climate change communication expert Katrine Claassens it is crucial that such information is conveyed in a way with which people can connect - and not just see as something technical or abstract.

For the past almost 12 000 years we’ve been in the Holocene epoch – an era described by Claassens as having “stable weather that is perfect for human beings and has seen the rise of writing‚ art‚ and pretty much everything we as humans know”.

But now‚ we’re in something far scarier: the Anthropocene‚ which is basically a geological age characterised by our own influence on the planet (think nuclear bomb tests‚ disposable plastics‚ and the human population boom‚ according to the experts).

This concept fascinates Claassens in a way that terrifies her‚ and which has occupied her mind ever since she read Cormac McCarthy’s harrowing dystopian novel The Road which is set in a world of “total ecological collapse”.

Having worked as an artist for 10 years‚ she then did a masters degree in climate change and development‚ and is on a mission to convey the realities of the Anthropocene through art and narratives that are accessible to all.

“I did a trip to the Arctic in 2015 and did a series of works based on a question I had asked different scientists: what do you feel when you think of climate change?”

When the chance came to go on this latest trip‚ she jumped at it.

Despite vomiting for the first four days‚ and feeling hideously nauseous for all 16 days of the trip‚ it was a point of major inspiration for her.

She came home with melted sea ice which she is using to make a series of paintings.

And‚ once she got started‚ the images began appearing on the canvas like an icy incarnation of Monet’s water lilies.