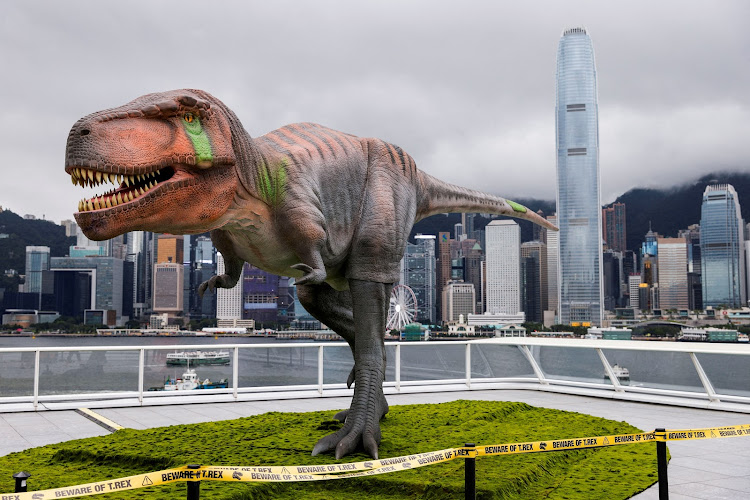 A 4.6m-high robotic Tyrannosaurus rex dinosaur installation in front of Victoria harbour during a promotional event in Hong Kong. A recent discovery in Argentina is providing insight into the evolution of some of Earth’s biggest predatory dinosaurs, including a curious trend toward puny arms. File photo.
Image: Tyrone Siu

Fossils found in Argentina of a ferocious dinosaur with a huge head covered in bumps and crests reminiscent of a gargoyle are providing insight into the evolution of some of Earth’s biggest predatory dinosaurs, including a curious trend toward puny arms.

Scientists said on Thursday they discovered in northern Patagonia extensive skeletal remains of a previously unknown species called Meraxes gigas, including one of the most complete skulls of a large meat-eating dinosaur ever unearthed. Meraxes, which lived about 90-million years ago during the Cretaceous Period, was roughly 11m to 12m long and weighed about four metric tons.

The Meraxes skull measured more than 127cm long, according to paleontologist Juan Ignacio Canale of the Argentine research agency Conicet at the Ernesto Bachmann Paleontological Museum, lead author of the study published in the journal Current Biology..

“Many of the bones of the face and skull roof were covered with bumps, ridges and furrows, giving it a gnarly appearance like a medieval gargoyle,” said University of Minnesota paleontologist and study co-author Pete Makovicky.

Meraxes, named after a dragon from the Song of Ice and Fire fiction series that inspired the TV show Game of Thrones, possessed strong jaws studded with 15 cm serrated teeth and the largest foot claws of any of the big theropods.

Despite its big body size, its arms were just over 60 cm long, or “absurdly short”, Makovicky said.

Due to the incompleteness of the remains of other large carcharodontosaurs, Meraxes offered the first evidence of forelimb reduction in this group. Abelisaurs had hands with four fingers, while carcharodontosaurs reduced that to three and tyrannosaurs to two.

Scientists have wondered why three of the most important theropod groups independently evolved short arms of little use in predation. All three exhibited a trend toward increased head size and decreased forelimb size, suggesting a heavy reliance on the skull for taking down prey, the researchers said.

While diminutive in size, the Meraxes arms were stout and muscular.

“Despite their powerful appearance, it is hard to imagine they were used much as they barely extend beyond the body and could not have reached the huge mouth,” Makovicky said.

“I’m inclined to think they were used in other kinds of activities, like holding the female during mating or help in raising the body from a prone position,” Canale said.

Some other lineages of large theropods did not join the trend. Immense Spinosaurus, with an elongated skull well adapted for hunting aquatic prey, had intermediate length arms. Strange Therizinosaurus and Deinocheirus, whose diets differed from other theropods, boasted relatively long arms with huge claws.

Carcharodontosaurs reached their peak diversity around 90-million years ago, then disappeared suddenly.

Meraxes is not the largest of this lineage but its remains are the most complete of the largest carcharodontosaurs, with nearly the entirety of the skull, hips and limbs filling in some gaps in the understanding of this group.

For instance, based on the dimensions of the Meraxes skull, the researchers recalculated the skull length of Giganotosaurus at a whopping 168cm. Giganotosaurus, the largest of this lineage, was slightly longer but not as heavily built as Tyrannosaurus rex, which lived tens of millions of years later.

Dinosaurs in this lineage, Apesteguía said, “are mysterious beasts to us”.

The iSimangaliso Wetland Park Authority in KwaZulu-Natal has warned visitors and neighbouring communities to steer clear of roaming elephants.
News
1 month ago

Limpopo police are investigating the murder of Riaan Naude, a renowned wildlife hunter who was shot dead near Kruger National Park last month.
News
1 month ago

Vigilance against the spread of foot and mouth disease is more critical than ever because the disease is far from under control, a veterinary surgeon ...
News
1 month ago