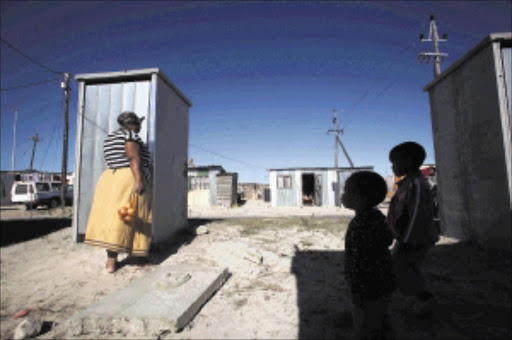 After many months of protest, a court battle and violence, residents of Makhaza on the Cape Flats have finally got what they always wanted: concrete enclosed toilets.

City of Cape Town contractors were setting up the enclosures yesterday after building prototypes for residents to inspect.

Residents agreed that the new facilities - despite being as basic as it gets - were dignified enough, and gave the city the thumbs up.

Makhaza hit the headlines in 2009 when it emerged that residents had to use toilets in full view of their neighbours.

Pictures of people relieving themselves with only a blanket for privacy sparked a national outcry.

It took an urgent application to the Cape Town High Court, a Human Rights Commission investigation and careful planning and consultation to end the ugly saga.

One prototype went up on Luzuko Dyantyi's property on Monday, and residents thronged to inspect it. He encouraged them to flush and even try out his new facility in front of his home.

"There are people here constantly and they are very pleased. But I am not 100% happy yet. I have the sample toilet on my property but only once everyone has theirs will I be 100% happy," he said.

"Yes, finally we are satisfied and happy with what the city built for us. Finally, we got what we deserve," he said.

Residents pleaded in the high court last year for concrete walls for the toilets. The city had tried to enclose them with corrugated iron, which they broke down.

In November, Judge Nathan Erasmus inspected the toilets, many enclosed by residents.

Some had no doors. One was enclosed with wood and thick plastic, and another with plywood and corrugated iron. Many did not work properly. Several were barely a metre from the street.

Wheelchair-bound Mbuyiseli Vellem showed the judge his shoddily enclosed toilet. He had a ramp built with concrete slabs leading to it, but Erasmus pointed out there were no railings to help him get on the seat.

Sadly Vellem died in April before he could use his new toilet.

His son, Mzuvukile, 21, said: "He was happy that at least he would get a proper toilet."

This May, Erasmus ordered the city to enclose all 1316 toilets.

"This is a positive step forward in our efforts to close the chapter of the Makhaza toilets with dignity and in a lawful manner," she said.

"I hope that this will also go a long way to repair the relationship between the city and the people of Makhaza," she said.