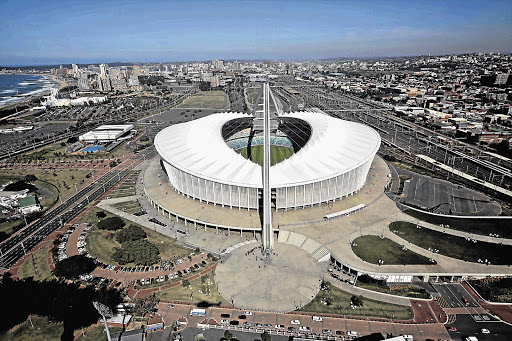 Durban's multibillion-rand Moses Mabhida stadium continues to run at a loss, but the eThekwini municipality insists it will never become a white elephant.

The municipality's 2010-2011 financial statement shows that more than R92-million is needed to operate the R3.1-billion stadium, but only R72-million revenue was generated.

City treasurer Krish Kumar yesterday admitted the 2010 World Cup stadium had not made a profit since it was built. He said a grant from the Treasury and ticket sales generated during the Fifa World Cup helped the stadium to cover some of its operating costs.

Kumar said the stadium's attractions - including the sky car, bungee-jumping facility and restaurants - would prevent it from becoming a white elephant.

"The stadium's attractions continue to be extremely popular, with more than 10000 visitors a month. Non-bowl events, such as conferences and private parties, have generated more than R10-million this year, and the sky car has generated over R5-million," he said.

He said, apart from hosting concerts and shows, revenue was also generated through corporate advertising and rent from retail stores.

Kumar admitted the city had failed to bring on board any sports team to use the venue as their home ground, but hastened to say there were long-term goals to stage knockout soccer tournaments and concerts.

Also on the cards is a special motor show in June next year.

DA caucus leader Tex Collins yesterday called on the city to reopen negotiations with the Sharks.

"They need to engage the Sharks again. But over and above that, they need to extensively market the stadium or it would become a white elephant. The sky car will never generate the kind of revenue needed to run the stadium. The city needs to get some sort of entertainment on a regular basis because AmaZulu will certainly not do it. Otherwise we are faced with a big problem," he said. - Additional reporting by Canaan Mdletshe