Five runners killed by this car 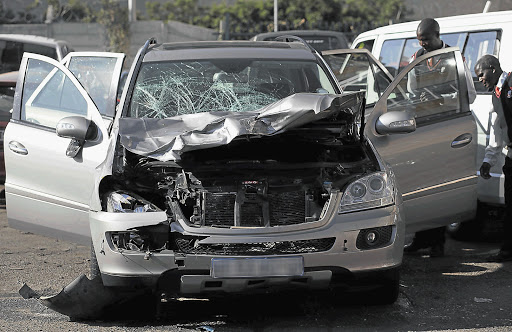 THIS is the mangled car that mowed down six joggers - five of whom are dead - in a horror crash early yesterday.

The silver Mercedes-Benz ML500 rammed into the group of runners preparing for next month's Soweto Marathon shortly after 6am on the corner of Olifantsfontein and Lever roads in Midrand, Johannesburg.

The driver was detained at the scene after he tried to walk away from the carnage. Witnesses claim he was so drunk he had to be reminded that he had driven into the joggers .

When emergency workers arrived on the scene they found the runners scattered across the road.

Two of the group's usual running mates, Sihle Mlaba and Vusi Madonsela, escaped the fatal accident because they were late for theearly morning run.

The shocked duo yesterday told of how they missed the accident by a matter of minutes. Said Madonsela: "At the scene we were shocked to discover it was our running mates ... they had broken legs and arms. Their bodies were badly disfigured. It was so disturbing."

Mills recently posted on Facebook that running was her life and that she would run 18km every day before work. She posted pictures of herself, telling how running kept her fit.

Johannesburg Metro Police spokesman Edna Mamonyane said the driver would appear in court tomorrow on charges of culpable homicide. She said this could later be changed to murder.

Mlaba, who ran five minutes behind the group and was one of the first on the scene, said the driver was "too drunk to even realise what he had done".

He said the man, whose name is known to the Sunday Times, climbed out of his car and began walking away towards Blue Valley Golf and Country Estate. He was prevented from leaving by an angry crowd at the scene.

Madonsela said the group had left their cars at the Virgin Active gym in Midrand before starting the run.

Duane Newman, the chairman of Breakthru Midrand Striders, confirmed that one of the victims was a member of his club.

"This is tragic," said Newman. "It is vitally important that the police are more visible in the early hours of the morning when drunk drivers are on our roads."

The others belonged to athletics clubs Vodacom Yebo Striders and Goldfields Athletics Club.

Sthengile underwent an emergency operation at Life Fourways Hospital and was in a critical but stable condition.