If you believe Aids won't affect you, think again 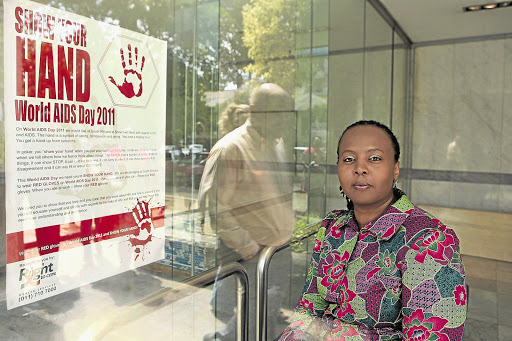 IMPROVED relations between the government and Aids organisations has Dr Thembisile Xulu excited about the battle against HIV.

With World Aids Day taking place on Thursday, Xulu told the Sunday Times of the strides South Africa has made in dealing with the pandemic - and about her passion for educating employers on how to promote healthy lifestyles and fight discrimination against HIV-positive employees.

A big concern for many experts like Xulu is that the bleak economic situation might leave companies thinking they can cut corners in dealing with HIV-positive employees.

But, she warned, this could be a catastrophic and short-sighted approach.

"Employers are better off retaining the employees who are already part of their value systems. In my view, testing and identifying people who have chronic illnesses, including HIV, and intervening only adds to the eventual bottom line of the employers."

Xulu, from KwaMashu, Durban, obtained her degree from the University of KwaZulu-Natal in 1997.

After stints at public hospitals, she joined Right to Care and has even lectured internationally.

She said the government's new approach to Aids NGOs marked a significant shift from the past, when they were often seen as an irritation.

"When the government now talks about us, it refers to us as partners. We are at a stage where we engage with the government and coordinate our activities, with no confusion about territories.

"We are working with each other, and we have a stage ... as partners, we can raise our concerns and we are heard. It's changed completely."

Ever since the young doctor saw the impact of the pandemic while based at Chris Hani Baragwanath Hospital, where she worked as a clinical investigator, she knew she had found her calling.

Xulu left the hospital to begin her meteoric rise in HIV activism and project management.

In 2004, she enrolled at the University of the Witwatersrand for her master's degree in public health and joined Right to Care.

The organisation has grown enormously, now testing about 330000 patients a year and treating more than 125000 HIV-positive patients at more than 170 sites.

Xulu was appointed as MD of the organisation's newly formed company in May this year, focusing on corporates and the health and wellness of employees.

Last year, she spent six months at Yale University in the US as a Yale World Fellow - where her "blinkers" fell off.

"At Yale, I had all this time where I could think about what I want to do with my life ... It made me realise that maybe my purpose in life is not only about me, but about helping others."

She is now determined to help companies realign their focus to concentrate more on the health of employees and advocate healthy lifestyle choices.

"I think companies have got better over the years in promoting these issues, but it's still not enough. There are still issues of workplace discrimination against people with HIV, so there are some employers who are not yet as engaged and committed."

She said workplace discrimination was "purely driven by a lack of knowledge.

"There are some people who still believe they are not yet vulnerable, so some just don't pay attention. Everyone is vulnerable to HIV. That is a reality people must realise.

"HIV and other chronic diseases cost employers money, and they need to take it seriously and invest not just in testing, but also disease management and follow-up, and through reducing absenteeism and increasing the number of days people are at work, they can increase productivity. Stay committed to the health and wellness of your employees."

Right to Care has received massive grants from the US government, with a $173-million (R1.4-billion) grant from the President's Emergency Plan for Aids Relief as the biggest.

Xulu said it was important for Aids organisations to keep tight control over how they spend the money, pointing to the clean audits Right to Care have received as the perfect example.

"We remain committed to our cause ... it's essentially about correct care and that people have the ethical, legal and constitutional right to the highest quality of evidence-based medicine."