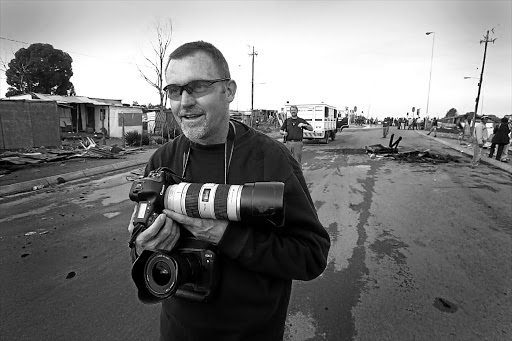 THE sudden death of former Sunday Times photographer Jon Lynton David Hrusa on December 19 ended a career of 25 years and, at the same time, put his troubled mind at peace.

Known for his passionate rendering of subjects as diverse as cricket and HIV/Aids, Hrusa brought an intensity to his work that left an indelible mark on colleagues - and occasionally frustrated deadline-driven reporters because he would leave an assignment only when he had the shot he wanted.

His dedication to the craft was never in doubt. As a freelancer, he picked his topics carefully and then, consumed with the task at hand, threw heart and soul into the job.

He described himself as a storyteller, depicting nature and humanity through photography.

Over two decades his work won him plenty of accolades, as well as the acclaim of his peers, many of whom - including New York Times photographer Joao Silva, recently back in SA after losing both legs below the knee in Afghanistan last year - bade him farewell at a memorial service in Johannesburg on Thursday. Ironically it was at the very church where Hrusa attended Sunday School as a schoolboy, and, more recently, attended a Sunday evening support group for addiction.

For while he was full of intense creativity, he was also afflicted with bi-polar disorder.

He nevertheless soldiered on through his depression, often under heavy medication, and was working with the European PressPhoto Agency (EPA), which he had joined in 2003, until three weeks before his death.

Hrusa had been in Warden in the Free State for a court case when he contacted his sponsor from the support group, who was driving him back home to Johannesburg when he died.

The details of how he died are sketchy and an inquest into his death has been opened.

His partner, Heather Mason, said it was during a school biology trip to Namibia that he became enchanted with photography, captivated by the light on the sand dunes.

Having matriculated from St Stithians College in the mid-1980s, Hrusa spent about six months at Wits University, where he was planning to move onto studying medicine, but dropped out.

His first job came courtesy of the then South African Defence Force, shooting images for the army's magazine.

By the next decade photojournalism had beckoned and so began a distinguished career, beginning with the Pretoria News, Sunday Times and Sportsday.

Photographing sport was undoubtedly his forté, with one former colleague, Raymond Preston of the Sunday Times, ranking him as one of the world's top five cricket shooters.

Preston was at a test match in Johannesburg when Hrusa, in customary fashion, became so absorbed with the job that he dehydrated to the point of needing urgent medical help.

Paramedics "picked him up and put him on a drip", recalled Preston. An hour later Hrusa, sufficiently hydrated, was back in his seat and working.

Prior to joining EPA, Hrusa freelanced for Associated Press and Reuters, and lent his expertise to non-government agencies.

His photos have appeared the world over, in venerable publications which include National Geographic, the New York Times and Time magazine.

Awards flowed throughout his career, and in 1991, he was named South African Press Photographer of the Year and Allied/M-Net South Africa Sports Photographer of the Year. He was awarded third place for Environment and Nature Stories at the 2001 World Press Photo Awards. Most recently, in March, he was runner-up in the USAID Frontlines Photo Contest.

Aids and the environment were subjects he keenly highlighted through documentary photography.

For three months in 2000 he followed the huge rescue operation of African penguins in Cape Town after a tanker oil spill.

His pictures were featured in a subsequent book Spill - Saving Africa's Oiled Penguins, published by the International Fund for Animal Welfare (IFAW).

Hrusa also became a key photographer for the Elizabeth Glaser Pediatric Aids Foundation, focusing on the disease in sub-Saharan Africa.

Beyond his professional work he found great joy in capturing images of clouds and their strange formations.

Mason remembered how they would hop in the car after a storm and drive around Melville in search of spectacular clouds.

"Jon didn't hide behind the camera. He was emotionally involved in the people he photographed. He was masterful and very skilled, and had an amazing eye. He had an eye for capturing emotion."

By nature he was well-groomed, taking care with his attire and manners and, said his friend, fellow photographer Wayne Conradie, "loved good food, good wine and good watches". Although of average size, he possessed a fierce handshake, something that always struck Hrusa's boss at EPA, Kim Ludbrook.

"I remember your vice-like handshake," Ludbrook wrote in an Internet tribute last week, "your love for nature and your 4x4, for your trips to Botswana to see [your brother] Tim, for our long coffee chats about life and work, for your passion for, and exceptional coverage of, cricket ...

"... for your amazing sports images and your intensity that now will be missed, I remember our meetings with my father and our talks about the bush, I remember the fly- fishing calendar we worked on together, I remember, I remember."

In a nod to Hrusa's mental health struggles, Ludbrook said: "I know you struggled with 'self' and I walked next (to) you down this long, hard, often-dark path for so long, but I remember you and the light you brought to the world: Namaste; I see the light in you ..."

Hrusa is survived by Mason, his mother Jean and siblings Sue and Tim.