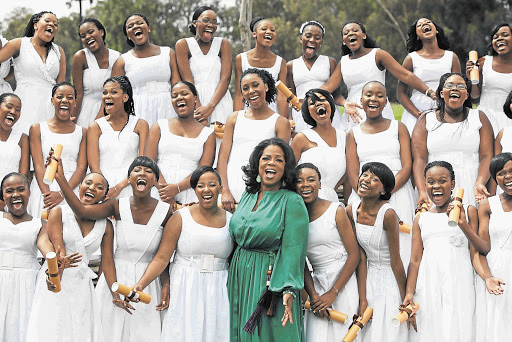 An emotional Oprah Winfrey at the first graduation ceremony of pupils to matriculate from her Leadership Academy for Girls in Henley-on-Klip, south of Johannesburg. The class of 72 - most, if not all, born since apartheid's demise - scored a 100% pass rate and 188 distinctions between them Picture: JAMES OATWAY

OPRAH Winfrey took a swipe at South Africa's modest matric pass requirements during the inaugural graduation of her first class of matrics yesterday.

Speaking at her Leadership Academy for Girls in Henley-on-Klip, south of Johannesburg, she said: ''If you are working with boys or girls who are disadvantaged, people underestimate and set the bar too low.

Winfrey said the criteria for passing matric was ''way down here''.

Of the 72 who wrote matric from the school last year, 71 qualified for university admission and one achieved a pass enabling her to study towards a diploma.

A tearful Winfrey said: ''This is a day of triumph. A day of extraordinary victory. These girls were born into a nation that said, 'you are free'.''

Machel congratulated the girls, saying they had been ''groomed and mentored'' by "one of the best women of our times".

''As a state you can't exclude kids who are not that intelligent ... at the academy here they take all number ones, so all the numberless come to us - to the state. ''

She admitted to being emotional at the ceremony, saying: ''Here's a gift of life - the education that Oprah brought.''