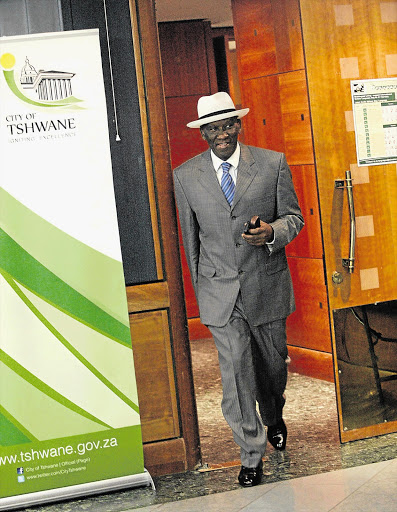 Suspended national police commissioner Bheki Cele was accused yesterday of being a liar at the inquiry into his conduct Picture: PEGGY NKOMO

Suspended national police commissioner Bheki Cele is "corrupt, dishonest" and "a menace" and should be removed from office.

These were the assertions with which evidence leader Mbuyiselo Madlanga closed his argument before Judge Jake Moloi yesterday at an inquiry in Pretoria to determine Cele's fitness to be South Africa's top cop.

Cele is implicated in two public protector reports for abuse of power in securing office space for the p olice.

Madlanga said there was conflict of interest in Cele's actions and his "gross misconduct" warranted his removal from office.

"[Cele] acted with an undisclosed conflict of interest. He introduced the particular building because he knew property mogul Roux] Shabangu.

"He then goes further to play an active role in the procurement process because he wanted to see to it that Shabangu got this contract," Madlanga said.

Cele's advocate, Vincent Maleka, SC, dismissed the allegations out of hand, saying they were "general and inflammatory".

Madlanga said that, based on evidence that the disgraced commissioner initiated the procurement process for two buildings - one in Pretoria, the other in Durban - with Shabangu, and actively participated in the process, he was corrupt.

Madlanga insisted that Cele was associated with Shabangu "because evidence shows that he was pushing for the leases to be awarded to Shabangu".

"He must have known him somehow," he said.

Madlanga asked that Judge Moloi accept the evidence of former police procurement head Lieutenant-General Hamilton Hlela, who said that Cele had told him at a meeting in a Boksburg, East Rand, parking lot in 2010 that there was a two-floor building, that was readily available, in Pretoria.

Hlela testified last month that he had asked Cele for the owner's contact number but was told that he would receive a call from someone.

"We submit that the reason Hlela returned [to the Boksburg meeting] was because Cele wanted to discuss with him the issue of the building.

"Shabangu called Hlela the same day that Cele had said somebody would call him [Hlela]. It was a calculated move by General Cele. He did not tell General Hlela that Shabangu owns a building and he will call him to discuss procurement processes," he said.

Cele had, Madlanga said, pointed out improprieties in supply-chain management when he took office. Only he could approve procurements of more than R500000.

He said Cele asked the Special Investigating Unit to look for irregularities in the police's supply-chain division.

But, Madlanga argued, Cele now wanted the inquiry to believe that he trusted his procurement officials, including Hlela.

"It is like a crab which walks sideways but admonishes its youngsters for doing so," Madlanga said of Cele.

Maleka took offence at Madlanga's remarks, saying the "dictionary meaning" of corruption he had submitted did not strengthen his case but destroyed it.

"We will show that there is no immorality on the part of our client as submitted. They are unable to show that our client is guilty of corruption or that he received a gratuity," Maleka said.

Maleka will continue with his closing argument today.