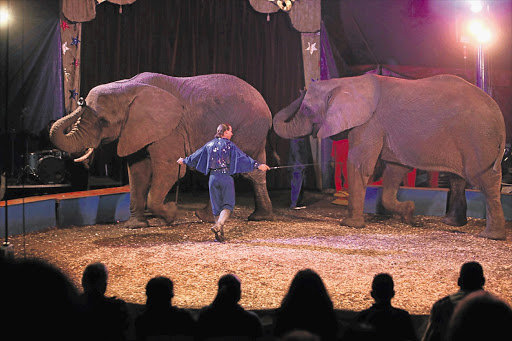 Brian Boswell's Circus has denied any form of cruelty to its animals
Image: THULI DLAMINI

Circus fans have given their support to Brian Boswell as he fights off animal rights activists.

The activists, who want to stop Boswell using animals in shows, protested in front of his circus in Durban on Sunday.

Boswell claims they also posted pictures on the internet that falsely depict him involved in acts of animal cruelty.

Yesterday, Boswell said he had instructed his lawyers to demand that the pictures be removed and that the activists responsible apologise for "perpetuating lies" about him.

Animal Rights in Action has been pushing for wild animals to be excluded from circus acts . Its ultimate goal is for no animals to be used in circus entertainment.

The Brian Boswell Circus has been in Durban for a month. It has extended its stay for another six weeks due to demand, increasing the number of shows it puts on at weekends to three.

Fans of the circus say they have seen no cruelty to the animals during the show.

Bobby Ramsey said: "My intention in coming to the circus was because I wanted to see for myself the 'cruelty' that angers people. But it's a different thing altogether. These animals are well looked after.

"I just do not understand what the activists want."

Ramsey said that, as an animal lover, if he had seen any wrongdoing, he would have immediately walked out of the show with his children.

"We all love wild animals, but there is no cruelty when it is shown that they can establish good relationships with the people [in the circus]," she said.

In addition to being opposed to animals being used for entertainment, the activists say the animals are mistreated backstage.

Carol Booth, the co-founder of Animal Righst in Action, said: "We merely say keeping animals in an unnatural environment and the way they are used in the circus is cruelty.

"We are not against the circus, just its use of wild animals."

Boswell said he was the victim of a slanderous campaign on the internet.

"The lies that have been spread by these people are too much. When you accuse someone of such a serious criminal offence as 'cruelty to the animals', it is no different to murder and rape," he said.

If anybody felt he was committing a crime, they should go to the police, he said.

"I take this thing very seriously."

Boswell said letters calling for the pictures to be removed from the internet had been written and all that remained was for his lawyers to send them.

Caroline Smith, the marketing manager of the Durban and Coast branch of the Society for the Prevention of Cruelty to Animals, said the organisation was against the use of animals in circuses, but no legislation forbade it.