Three 'near' misses in one weekend 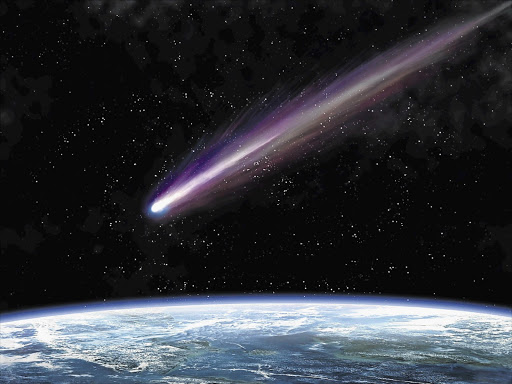 Asteroid 2013 ET could have wiped out a large city. File photo.

An asteroid as big as a city block shot relatively close past Earth at the weekend.

Discovered just six days ago, the 140m Asteroid 2013 ET passed about 966000km from Earth on Saturday. That is about 2.5 times as far as the moon, fairly close on a cosmic yardstick.

"The scary part of this one is that it is something we didn't even know about," Patrick Paolucci, president of Slooh Space Camera, said during a webcast featuring live images of the asteroid from a telescope in the Canary Islands.

Moving at a speed of about 41843km/h, the asteroid could have wiped out a large city if it had hit Earth, added Slooh telescope engineer Paul Cox.

Asteroid 2013 ET is nearly eight times larger than the bus-sized asteroid that exploded over Chelyabinsk, Russia last month, injuring 1500 people. The force of the explosion, equivalent to about 440 kilotons of dynamite, created a shock wave that shattered windows and damaged buildings.

Later that day, a small asteroid, known as DA14, passed about 27680km from Earth, closer than the orbiting networks of communications and weather satellites.

"One of the reasons we're finding more of these objects is that there are more people looking," Cox said.

Two other small asteroids, both about the size of the Russian meteor, were in Earth's neighbourhood at the weekend. Asteroid 2013 EC 20 passed just 4828km away on Saturday, said Cox.

"We know the solar system is a busy place," said Cox. "We're not sitting here on our pale-blue dot on our own in nice safety . This should be a wake-up call to governments."

The US Congress has asked Nasa to find and track all near-Earth objects of 1km or larger in diameter. Nasa estimates about 95% have been identified. But only about 10% of smaller asteroids have been discovered, it says.

The effort is intended to give scientists and engineers as much time as possible to learn if an asteroid or comet is on a collision course with Earth, in hopes of sending up a spacecraft or taking other measures to avert catastrophe.

About 100 tons of material from space hits Earth every day.

Astronomers expect an object about the size of the Russian meteor to strike about every 100 years.