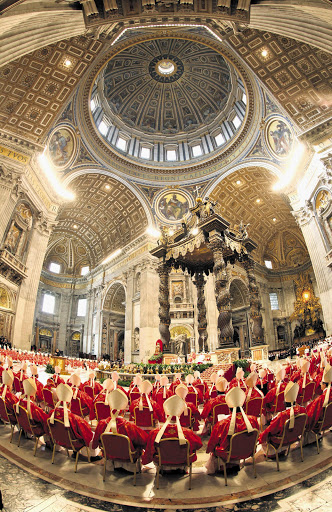 Roman Catholic cardinals chanted and prayed for divine guidance in the Sistine Chapel yesterday as they prepared for a conclave at which they will elect a pope who will face one of the most difficult periods in the church's history.

The 115 red-hatted and red-caped cardinals gathered in the Pauline Chapel and walked in procession along the frescoed halls of the Vatican's Apostolic Palace into the Sistine, where they could remain closeted for several days of balloting.

"The entire church, united with us in prayer, asks for the grace of the Holy Spirit at this moment so that we elect a worthy shepherd for the entire flock of Christ," a cardinal said.

The cardinals then chanted the litany of saints, asking more than 150 saints by name for help in making their choice of who should succeed Benedict XVI.

Once inside the Sistine, they took their places along the walls of the chapel and sang a hymn to the Holy Spirit, asking it to "visit our minds" during the election.

They then read an oath in Latin, promising to abide by all the rules of the conclave, including not to reveal anything about the voting.

The first vote is likely to be inconclusive because there is no frontrunner to succeed Benedict.

Smoke - white for a new pontiff, black after an inconclusive vote - will emerge from the chimney on the Sistine's roof when a ballot is held.

The balloting for the next pontiff will take place under the gaze of the divine presence represented by Michelangelo's fresco of the Last Judgment on the wall behind the altar.

The solemn afternoon procession into the Sistine followed a morning Mass in St Peter's Basilica, where Angelo Sodano, the dean of the college of cardinals, called for unity in the church and urged everyone to support the next pope.

"My brothers, let us pray that the Lord will grant us a pontiff who will embrace this noble mission with a generous heart," Sodano said.

No clear favourite has emerged to take the helm of the church.

Some prelates are calling for a strong manager to control the much-criticised Vatican bureaucracy; others want a powerful pastor to combat growing secularism among the laity.

Italy's Angelo Scola and Brazil's Odilo Scherer are spoken of as frontrunners.

The former would return the papacy to Italy after 35 years in the hands of Poland's John Paul II and of the German Benedict; Scherer would be the first non-European pope since Syrian-born Gregory III in the eighth century.

However, a host of other candidates from numerous nations have also been mentioned as potential popes, including US cardinals Timothy Dolan and Sean O'Malley, Canada's Marc Ouellet and Argentina's Leonardo Sandri.

The cardinals will emerge from their seclusion only after they have chosen the 266th pontiff in the 2000-year history of the church, which is beset by sex abuse scandals, bureaucratic infighting, financial difficulties and the rise of secularism.