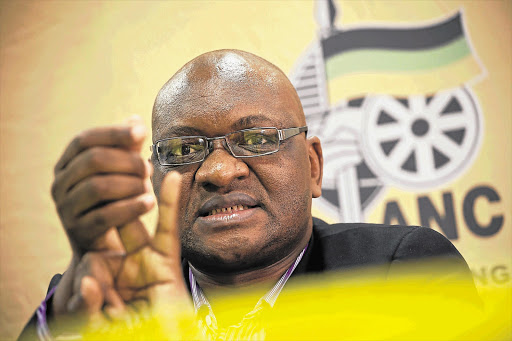 ANC Gauteng secretary David Makhura said yesterday that the DA's goal of winning the province in next year's elections was a 'pipe dream'
Image: DANIEL BORN

The battle to win the vote of the "clever black" is likely to intensify in the next few months - the ANC in Gauteng has announced that it plans to launch a massive election campaign ahead of next year's polls.

Makhura said it had decided to triple the number of election volunteers from 10000 to 30000 in preparation for next year's polls.

"We are going to pay special attention to the youth and the middle class in suburbs and townships across the province.

"We are going to experiment with new forms of campaigning that will generate excitement across different sectors among Gauteng's complex voting population, including strategic use of social media," he said.

Last week the Mail & Guardian reported that an ANC-commissioned survey had revealed that there was a growing distancing of the party from its supporters.

Citing political infighting, corruption among senior party leaders, poor service delivery, unemployment and inequalities the survey found that the middle class and the super rich were deserting the party.

The survey results were reportedly presented by ANC deputy secretary-general Jessie Duarte at a meeting of the party's national executive committee last year.

The survey also found that the unemployed young, who make up more than half of South Africa's population, were easily swayed to vote for opposition parties, especially the DA.

Despite this, Makhura said the provincial ANC was not threatened by the DA.

"The noise by the opposition, especially the DA, about winning Gauteng is nothing but a pipe dream . simply posturing.

"We shall meet them on the ground, where thousands of our volunteers have an unrivalled capacity to interact with voters and respond to their concerns.

"The machinery is composed of 3000 activists, who are the most experienced and dedicated campaigners on the ground."

Makhura said next month the party would launch volunteer corps and brigades made up of the most seasoned activists whose door-to-door canvassing abilities were unmatched.

"By the end of October, they will have visited every household in the province," he said.

The ANC faces a stiff battle ahead of next year's polls following its decision to implement e-tolls on Gauteng freeways .