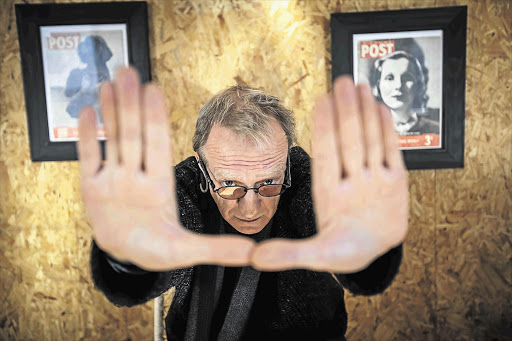 South African director and actor Andrew Worsdale is back on the big screen with 'Durban Poison'
Image: DANIEL BORN

I first met Andrew Worsdale a decade ago. He was a gregarious character with a penchant for cheap white wine and socially inappropriate quips. We got along because of our mutual passion for movies.

In person, Worsdale was a walking film encyclopedia who could talk loudly and passionately about film for hours. In public, he was a cautionary tale - one of the most promising young filmmakers of his generation who'd fallen in love with movies as a child, studied film at UCLA and, in his 20s, made the anarchic cult film Shot Down, which was banned in South Africa but gained some international success at festivals.

Then Worsdale lost his promising career to drink and self-destruction.

He became known as an obnoxious drunkard who made scenes at previews and social events. People no longer cared that Shot Down was one of the great films of the 1980s - one of the few that honestly attempted to deal with what it meant to be young, white, idealistic and existentially tortured in the oppressive pressure cooker of political turmoil that characterised the end of the PW Botha regime.

Worsdale survived by writing the occasional film piece for whatever magazine would have him, and by selling DVDs he was given to review. In his sober moments he'd talk about a film he'd written in the late 1980s called Durban Poison, a lovers-on-the-run, Bonnie and Clyde story that was a cinematic retelling of the exploits of real-life killers Charmaine Phillips and Piet Grundlingh.

The film was almost made in the early 1990s with Richard E Grant and Patsy Kensit. Then a production of the film starring Marcel van Heerden and Marie Human was cancelled a week before shooting. Added to this, the break-up of Worsdale's marriage and the unwillingness of the local film industry to trust him made it easy to reach for the bottle.

Now, 27 years after Shot Down was booed at the Durban International Film Festival, a sober Worsdale returns this weekend to screen Durban Poison, and to say to those who thought they'd attend his funeral before a viewing of his film, "I'm glad I can show you f**kers. I'm very, very, glad." It is no longer the retelling of the Phillips and Grundlingh story but a criminal-lovers-on-the-run film that's beautiful to behold. It is more mature and contemplative than Shot Down but true to Worsdale's belief that ''life is f***ed up but you should treasure the small moments".

The lead performances by Brandon Auret and Cara Roberts are mesmerising. With an excellent supporting cast including Van Heerden, and Human, and a hypnotic score by Jim Neversink, Durban Poison is a poignant, sometimes darkly comic love story full of regret and compassion.

The making of the film is the result of a chance meeting.

''I was down-and-out at Fournos with Darrel Roodt [an old university friend] and Dion Kempen, who said he wanted to make my movie, and it actually happened," says Worsdale.

When the film is distributed Worsdale hopes it will be seen by a broad audience.

"It's a crossover film and that's something I'm very proud of."

With a new film, Freddie's Hairfood Factory (a comedy about the music industry) produced by David Heitner in the works, this is hopefully the beginning of a new phase in Worsdale's career. The cautionary tale has become a story of how having one thing you're passionate about can save your life, no matter how long it takes.