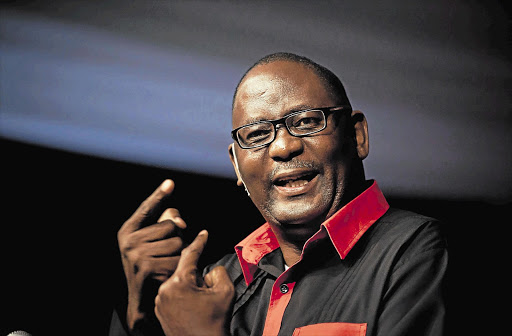 A case of extortion has been opened against a woman who allegedly tried to blackmail Cosatu general secretary Zwelinzima Vavi over a rape allegation, his lawyer said on Saturday.

Dup de Bruyn said that the charge was laid at Sandton police station on Thursday evening.

Vavi released a statement earlier on Saturday in which he denied having raped a Congress of SA Trade Unions colleague. Rather, he had been in a consensual extramarital affair with the woman, he claimed.

A document presented as the woman's grievance complaint of sexual harassment, Vavi's response to this, and smses allegedly exchanged between the two was attached to the statement.

Vavi also claimed the woman demanded R2 million from him in exchange for her silence on the matter.

De Bruyn said that the woman had not opened a case of rape with the police yet.

"We cannot comment further because there are two processes... the grievance procedure and the extortion charge..., which police are investigating."

Lt-Col Lungelo Dlamini was not immediately able to confirm whether a charge of rape had been opened.

The woman, whose name was included in Vavi's reply on the sexual harassment grievance, did not immediately respond to requests for comment.

The grievance letter attributed to the woman was to the effect that she had no intention of having sex with Vavi.

The email, allegedly sent by the woman, reads that she had refused Vavi's advances but he had forced himself upon her.

The woman apparently stayed away from her job at Cosatu because she feared it would happen again.

Vavi said on his Twitter account on Saturday morning: "I know many are extremely disappointed at news that I have admitted to hav[ing] cheated on my wife.

"I have apologised to her profusely," he tweeted.

He apologised to the South African public for the indiscretion and said: "I am only human and fallible. I am no saint".

In his statement earlier on Saturday, Vavi said the matter was "extremely intimate, private, personal and delicate".

He appealed, on behalf of his own family and that of the woman, to the media for privacy.

"There are two families and children on both sides involved in this extremely delicate matter.

"Their interests are foremost in my mind as we go through this period."

In his statement earlier, Vavi denied having raped the woman.

"I categorically and emphatically deny that on 25 January 2013 I went to complainant's office, 'grabbed' and kissed her, forcefully fondled her private parts and raped her."

Vavi said he believed the allegations were part of a plot to discredit him or extort money from him.

"All our encounters were encounters between two consenting adults who clearly had feelings for one another," he claimed.

"...For years now I have been dealing with consistent threats to my life, political assaults and efforts to destroy my contribution to the struggle of the working class and the poor in this country.

"Lately as we all know, these efforts to destroy me have intensified. I am unable not to view this matter in the same light."

Vavi told eNCA on Thursday that he had received numerous death threats, which hinted that he could be killed in a car "accident" or through poisoning.

On Saturday Vavi said he was "ready and willing to appear before any legitimate body to clear my name".

In response to the grievance against him, Vavi said: "On 3 July 2013 I received a letter ...[containing] the complainant's demand for payment of two million rand".

"This letter convinced my wife and myself that I was being blackmailed to pay this amount."

The Vavis' lawyers also viewed this letter as blackmail, he said.

Six days later, the lawyers sent the woman and her husband a letter "informing them that what they were trying to do is blackmail and extortion".

Vavi said there was no response to this letter.

The letter, allegedly from the woman and her husband, was attached to Vavi's statement.