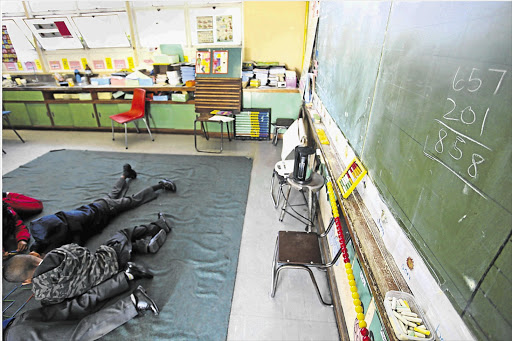 "I'm scared," whispered a Grade 1 pupil before the noise of a police helicopter drowned out his voice. His eyes filled with fear.

Yesterday, 30 of the 35 children in his class at Sonderend Primary School, in Manenberg, on the Cape Flats, were not at school. Gang violence between the Hard Livings and the Americans had kept them away.

"It's like war," said a teacher, who asked not to be named.

The school, with its trees and gardens, is an oasis in the squalor. But its caretaker, Graham Jaftha, was killed last week, caught in gang-war crossfire.

The Western Cape department of education is providing counselling for pupils and teachers in areas in which the gangsters are running amok.

When gang violence flares up other social workers and psychologists are brought in from other areas to help.

In addition to psychological help, teachers get massage therapy.

Grant met the principal of Sonderend Primary yesterday to discuss the dire situation.

On Tuesday and Friday the children were sent home when the shooting started. Yesterday, the absenteeism rate was 80% because of the funeral of an "alleged gangster" who lived nearby.

In the Grade 1 classroom, where bullets are still lodged in the walls, the five children sat quietly.

The dangerous classroom was, strangely, their "piece of normality", said their teacher.

"When we hear the guns we run to the back of the classroom and I have to shield them with my body," said the Grade 1 teacher.

"The [department] has helped a lot. They are doing drumming lessons with the children to get rid of their anger and they are even going to do acupuncture with the teachers," said another.

Said police spokesman Captain FC van Wyk: "The police maintained a high visibility in the area and we urge members of the community to come forward and report persons with illegal firearms and ammunition."