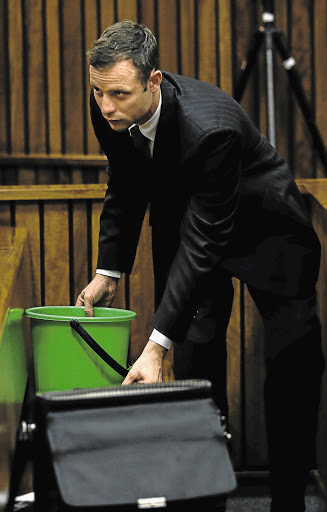 PREPARED: After throwing up during evidence about Reeva Steenkamp's fatal wounds, Oscar Pistorius had a bucket ready

Here are five things that have been discovered about Paralympian Oscar Pistorius, who is accused of murdering his girlfriend, Reeva Steenkamp.

1. When he is anxious, he screams like a girl. When things get tough, he retches.

Oscar Pistorius's lawyer, Barry Roux, has done his client's machismo no favours by indicating numerous times last week that his effeminate screams were an integral part of the defence. The screams witnesses heard were not the "bloodcurdling, terrified, anguished" cries of Reeva Steenkamp in fear for her life, but rather the anguished, anxious cries of Pistorius after realising what he had done. Roux put it to Pistorius's neighbour, radiologist Dr Johan Stipp, that he would be calling a sound expert who would testify to his surprise when he heard Pistorius scream much like a woman. He also said the defence had conducted "decibel tests" that would show the similarities. When Pistorius's former girlfriend, Samantha Taylor, testified that he had screamed in her presence many times and that his voice definitely sounded like a man's, Roux argued that she had only heard Pistorius scream in anger and never in a situation where his life was threatened. This raises the question of how the defence was able to create life-threatening conditions during their tests to replicate the Paralympian's anxious scream.

This week, journalists felt a little queasy at the sound of Pistorius retching in court when graphic pictures of Steenkamp's body flashed briefly on court screens, and things did not get any better when the smell of vomit started to waft through the gallery.

2. He is always packing heat and takes his cellphone to bed.

According to Taylor, Pistorius carried his firearm wherever he went. When they visited friends, his trusty 9mm would be with him. The only time he did not carry it was when he went to bed, and then he would place it within reach either on his bedside table or next to his legs, but, according to Taylor, never under the bed, which is where he claimed it was on the fateful night of Steenkamp's death. Pistorius's former friend, Darren Fresco, testified this week that Oscar rode in the car back from the Vaal with the gun sitting between his legs and that his former friend "loved guns". He also apparently got angry with a metro police officer who, after stopping Fresco for speeding, noticed Pistorius's gun on the passenger seat and emptied it. Pistorius told the officer: "You can't just touch another man's gun." Taylor also testified that her ex had two cellphones, one for work and one for Facebook, and whereas at night he would leave his work phone in the kitchen, his personal phone would accompany him to bed and even to the bathroom. Taylor said she assumed he was texting and would use the phone often during the night. When asked by Roux to explain what she understood often to mean, Taylor said: "It means a lot of times."

3. He is polite even to his enemies. Mostly.

Pistorius has been making efforts while in court to shake the hands of the people sitting on the Steenkamp family benches. On the day that Fresco testified, Pistorius tried to shake hands with Fresco's wife, who was in tears and unwilling to accept the hand he offered to her. He has also been seen shaking the hands of members of the ANC Women's League who have been in court, as well as the occasional journalist. But, after Fresco finished his testimony, there seemed to be no love lost between the two judging from the steely glares between them.

Neither Fresco and boxer Kevin Lerena nor the manager of Tasha's , Justin Loupis, and his wife could recall it, but Roux insisted that his client had offered to pay for the damages in the restaurant - even though he had asked Fresco to take the rap for the gun going off in there. Fresco told the court it was he who had offered to pay for the damages and Oscar had picked up the lunch bill . According to Pistorius's version of events, his offer was refused. It is nice to know he is happy to pay for the repairs if he shoots holes in your restaurant floor.

5. He has been known to awaken his girlfriends when hearing strange noises at night.

Under re-examination by prosecutor Gerrie Nel, Taylor was asked whether she could recall any times when Pistorius had thought he heard noises that might be those of intruders in his house. Taylor said she remembered a few times when Oscar had heard noises and awoken her before going to investigate. The noises had not resulted in any confrontations with intruders and Taylor said she could not remember any time when Pistorius had told her the next day that he had heard noises but decided not to wake her. -