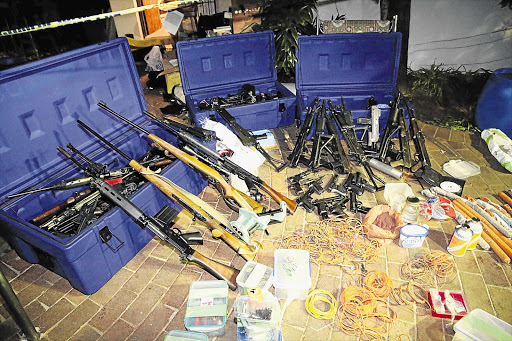 ARMED TO THE TEETH: More than 300 guns, explosives as well as ammunition were found in a house in Norwood, north of Johannesburg. A man, his daughter and a domestic worker were arrested
Image: SYDNEY SESHIBEDI

A massive firearms scandal unfolding in the Johannesburg Magistrate's Court is expected to lead to a wide-scale investigation involving corrupt policemen supplying arms and ammunition to criminals.

Thousands of weapons were surrendered to the police during the firearms amnesty of 2009 and were earmarked for destruction.

Prosecutor Talita Louw told the court yesterday that among the recovered weapons were guns that should have been destroyed during the amnesty period.

Louw said that an R1 rifle handed in at the Roodepoort police station, in April 2010, during the amnesty, was among the weapons confiscated from at the couple's house in Norwood, Johannesburg.

"In May, the same rifle was officially taken out of the storeroom for destruction. It is not known how the same firearm was found in the possession of the applicants," she said.

Louw said investigators were checking the serial numbers of other firearms handed in at police stations across the country.

"There are several firearms that have visible serial numbers but are not reflected as stolen on the firearm registration system . they are still registered and have ownership."

She said many of the other confiscated arms were, according to police records, state-registered.

"The only inference that one can make is that there is more to this case than meets the eye.

''Investigations are under way to determine how these firearms left the custody of the police."

The latest revelation has enraged Martin Hood, of the SA Gunowners' Association.

"It is obvious that the police do not have proper control of firearms in their storerooms.

"Are police corrupt in the handling of firearms? - totally," said Hood.

He revealed that a pistol, handed in for destruction at Tugela Ferry police station, in KwaZulu-Natal, was used in the killing of a Gauteng Spar supermarket manager.

Hawks spokesman Captain Paul Ramaloko said the investigation of the Norwood arms cache had been widened "after certain facts came to light".

"If it's proved that these weapons were meant to be destroyed as part of the firearms amnesty, we will hold [the police officers involved] accountable.

"Wherever the investigation leads us, we will go," he said.

Investigators are trying to establish what crimes had been committed with the seized weapons.

A policeman involved in the registration of firearms said: "The police allegedly behind this could, if found guilty, be responsible for murder or other violent crimes.

"There are meant to be strict controls around police exhibit [stores] and strongrooms where weapons handed in or recovered are kept."

He said that only police station commanders and strongroom clerks were allowed access to the guns in their keeping.

"There is a critical failure around the safeguarding of the strongrooms.

"People who handed in guns for destruction did so thinking the police would destroy them but these promises have not been kept."

He said weapons earmarked for destruction had to be destroyed.

"There is no way around this," the police source said.