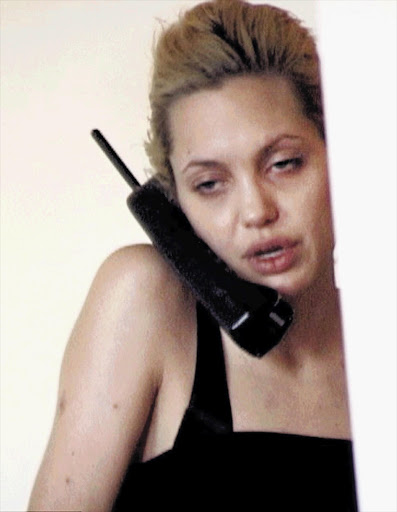 A 16-minute video has surfaced of actress Angelina Jolie, allegedly taken by a drug dealer after she'd had a hit of heroin in the 1990s
Image: YOUTUBE

She's a permanent feature on various lists of the sexiest women in the world but there is nothing sexy about the Angelina Jolie shown in a newly released video apparently shot after allegedly taking a hit of heroin.

According to the UK's Daily Mail, the video, in which Jolie's eyes are bloodshot and hollow, and her arms emaciated and scratched, was allegedly shot by convicted drug dealer Franklin Meyer.

While digging her dirty fingers into her skin, the gaunt-looking Jolie makes little sense, telling a phone caller, widely believed to be her father, actor Jon Voight: "You know but it's, you know it's, whatever that house . I said once, well, what if I stop working? She's like, telling me to relax, you know. But to, you know, I said what if I don't work for you, what if I don't make that much money?

"You know I don't want this to ruin our relationship."

It is believed she was discussing her brother, James, and late mother, Marcheline Bertrand, in the emotional video.

Meyer claims he shot the 16-minute video with Jolie's consent 15 years ago after she allegedly called him to her Manhattan home to re-supply her with heroin and cocaine.

The Telegraph reported that Meyer claimed Jolie would spend more than R1000 a week on drugs, many years before her engagement to Hollywood heart-throb Brad Pitt, and before their six children.

Meyer is quoted as saying of the now 39-year-old actress: "Angie was a client of mine for several years. I sold her heroin and cocaine."

Three years ago, Jolie told 60Minutes: "I went through heavier, darker times and I survived them. I didn't die young, so I'm very lucky. There are other artists and people who didn't survive certain things.

"I think people can imagine that I did the most dangerous and I did the worst."