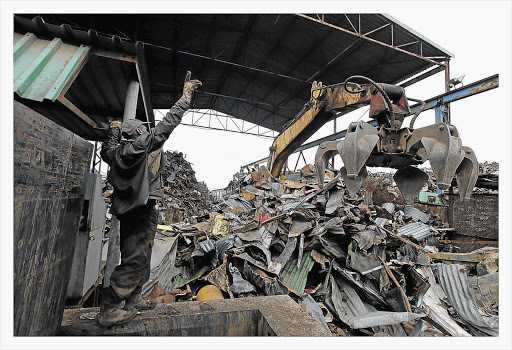 A scrap metal yard in Mthatha. While many scrap yards are legal operations, there are others that purchase items stolen from infrastructure, and this places a heavier burden on taxpayers, who fund replacement
Image: ALON SKUY

As Johannesburg revealed that it lost over R57-million to scrap-metal thieves, two men were arrested while chopping up poles that had been ripped from the ground.

The two were inside a stormwater drain alongside Wemmer Pan Road, near Rosettenville, when metro police caught them in the act.

Metro police spokesman Wayne Minnaar said the suspects would be charged with malicious damage to property and theft.

The arrests came within hours of Darryll Thomas, the Johannesburg Road Agency's head of mobility and freight, saying criminals were stripping the city's roads, with the M1, M2 and Soweto highways hit the hardest.

"These crimes are damaging our economy and heritage. Even the Nelson Mandela Bridge is being stripped of railings," he said.

The JRA estimates that it lost R57.46-million to theft in the past year and is appealing to residents to report acts of vandalism on 0860-562-874.