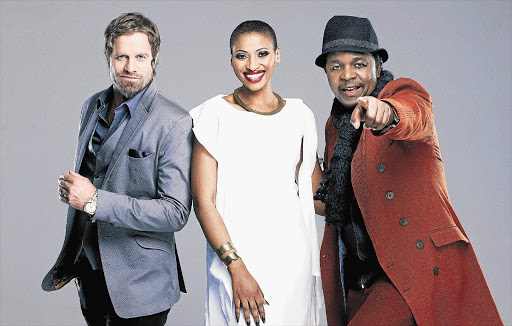 HEY, YOU OUT THERE: The judges for the inaugural season of 'X-Factor SA', will be Arno Carstens, Zonke and DJ Oskido. The winner of the competition gets a Sony Music Entertainment recording contract and R300000 in cash
Image: THE X FACTOR SA/SABC1

The inaugural season of XFactor SA is only one week in but the SABC1 show's premiere has already provided some pointers about what to expect.

When a duo called Iziqhaza performed their own song, which had an Afro-soul feel to it, Carstens said he needed to "hear another side " to the band. Zonke, Oskido and, most important, the crowd disagreed.

Oskido even said late icons Brenda Fassie, Miriam Makeba and Lebo Mathosa would all be "dancing" to the duo's drum.