A woman is shot, kicked, raped, beaten to death every 8 hours in South Africa 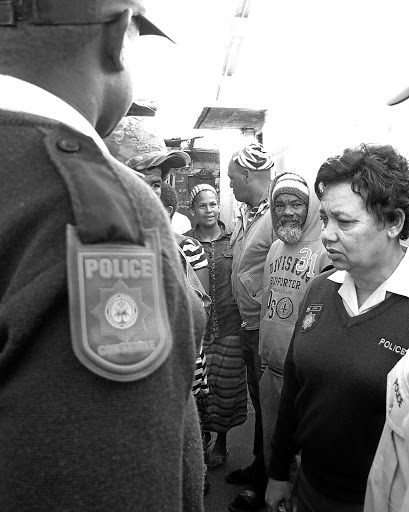 Bernice Joseph, the station commander in Kensington, Cape Town, serves a protection order on a man who beat his wife. An officer from the crime prevention unit said the irony was that abused wives often protected their husbands from the police
Image: PEARLIE JOUBERT

It's December again. The 16th time our country marks the internationally recognised 16-day campaign to prevent violence against women and children. It's punted by the Ministry of Women, Children and People with Disabilities - famous also for corruption and mismanagement.

For South Africans it's when we experience the annual increase in rape reporting, shocking radio ads and calculate another 300000-plus protection orders issued by courts.

On day two of the 16 days campaign, just after 10pm, 19-year-old Carmen Barros and her boyfriend were walking down Albacore Road in Kensington, Cape Town.

When the first shots rang out, Barros ran hard. Swerving, scared. A bullet meant for her gangster boyfriend entered her slender back, presumably puncturing her spinal cord.

The family refuse to speak. People on the scene said she was paralysed before the ambulance arrived.

In Kensington, Barros was known as a gangster chick. She was the girlfriend of the Vatos Locos gang's shooter. Each gang has its shooters (with guns), runners and drug peddlers. Because Barros hung out with gangsters, her chances of being klapped, kicked, shot and raped quadrupled, according to police statistics.

Vatos Locos, or VLs, are a local gang named after the Mexican gang, meaning "Crazy Dudes". The VLs and other gangs - the Americans, the Goroboys, Westsiders and Nice Time Kids - are fighting deadly small-town gang wars for control over Albacore's dirty street corners, where they sell tik and mandrax.

Some 71% of the inhabitants of Kensington and Factreton are unemployed. On police raids into dilapidated houses, the kids' hair shi nes copper with kwashiorkor.

Police intelligence units link 93 premises on Albacore Road to either the VLs or the Wonderkids as places where alcohol or drugs, or both, are peddled.

In the past six months, 254 domestic violence complaints have been laid in the area. About half have resulted in protection orders being issued, but only 15% have resulted in criminal cases, because the women withdraw charges.

Nobody knows how many women and children are abused every year in South Africa.

Neither the police nor the National Prosecuting Authority, nor 470 NGOs working in the field have accurate statistics - because there's no such crime as domestic violence.

Police statistics reflect only reported crimes such as assault or rape. Economic abuse, forced isolation and verbal abuse are not considered crimes.

What we do know is this:

A woman is shot, kicked, raped, beaten to death by a husband or boyfriend every eight hours;

As many as one in four women are being abused at home. Some researchers say that in parts of our country, such as Limpopo and the Western Cape, the figure is one in two;

When a woman arrives at a police station after she's been abused, she is taken to a place of safety - while the perpetrator stays at home. Places of safety are temporary and have waiting lists;

Last year some 309000 protection orders were issued and 70% of those were new;

Only about 15% of domestic violence complaints attended to by the police during a six-month period resulted in criminal cases being opened.

According to senior police officers in Cape Town, between 80% and 90% of domestic violence complaints are withdrawn by complainants because they are economically dependent on the abuser.

"The legislation's there. No woman should be abused; no man should be able to get away. Yet that's what happens. Women get beaten and abused and most men get away because women withdraw the cases," a senior prosecutor said.

Interviews with community workers from the NGO Mosaic, which provides court assistance to women, confirm this. "We find women coming forward only after at least 10 years of frequent domestic abuse," said Mosaic director Chantel Marais.

"In areas where gangs operate, children are exposed to domestic violence daily.

"They're socialised into a culture of violently dealing with conflict before they become involved in gangs. If we manage to deal with domestic violence effectively, it'll go a long way towards mitigating the risk of children becoming gangsters," said Veary.

An officer from the crime prevention unit working in Kensington said: "Attending a domestic violence complaint, you arrive at a house and have to use minimum force to restrain the man. The moment you touch him, they lay a charge against you and get the very woman who phoned for help to testify against you ... We don't like doing these cases, but you also know that if you don't attend, it may just be the night that woman is beaten to death."