The Big Read: The cheaters were cheated 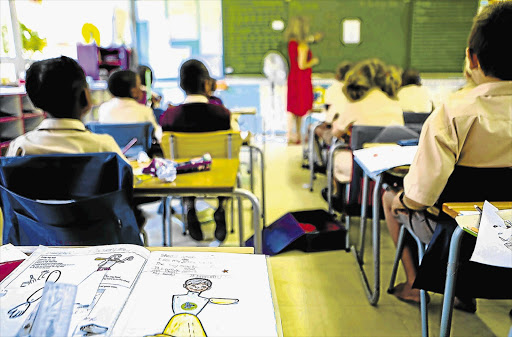 PRESSURED PUPILS - AND TEACHERS: The Department of Basic Education must think we're all idiots, suggests the writer, judging by the absurd statements its officials put out to rationalise matric results
Image: LAUREN MULLIGAN

When the Grade 12 pass results increase, as they have done in successive years under the current minister of basic education, high officials in the department tell us the system is finally showing signs of improvement.

When those results decrease, as in this week's announcement of the disappointing 2014 outcome, the same officials tell us that last year the focus was on quality - hence the drop.

I wonder if these people take the public for a collective bunch of idiots. We are asked to believe that somewhere in the period of 12 months a set of decisions were made to shift the policy momentum from improving access and success to deepening quality in a system that still allows for 30% and 40% passes.

I do not think we should read the see-saw in the results to be a consequence of policy. There is far too much noise in the system to know with clarity what caused the dip. For one, the academic outcomes for such a large number of candidates, adjustments notwithstanding, cannot improve in a straight upward line all the time. The strange policy of allowing automatic promotion in the senior year must have affected the results - a sizeable number of Grade 11 students who had already failed in the phase went through to Grade 12 without demonstrating mastery of the knowledge in that year of study.

There were again curriculum changes that must have affected teaching and learning. The basic pedagogical routines that are prerequisite for academic success are still not established in most of our disadvantaged schools.

All these factors play a role; we do not know the magnitude of their individual effects on the Grade 12 results. What we do know is that the system is under pressure, and it is a pressure that is not sustainable.

In this regard there are two ways of looking at the mass copying of answers that led to the withholding of results in more than 50 centres by the education authorities.

We can begin, like most commentators, and condemn these corrupt teachers and pupils who undermine the integrity of the national examinations that Umalusi and the education department have worked hard to establish. Then what?

We all pointed fingers and meted out judgment and condemned the perpetrators - but few asked why anyone would risk a career, in the case of teachers, or performance in a do-or-die final examination as far as the pupils are concerned. It's quite simple - pressure.

When humans are under pressure they do strange things; things they would not normally do and that could wreck their lives in an instant.

Consider this scenario. Teachers who are not competent in the subject and pupils who are therefore hopelessly under-prepared for the exams are faced with a choice - fail miserably, or take a risk.

In schools where basic materials have not arrived and the infrastructure remains in shambles, what is there to lose when you look across the ridge or the railway line and see fancy schools with tuition fees in the tens of thousands of rands, where the children play a very different game to mere survival - how many distinctions will the school achieve this year?

This is not an argument to defend wrongdoing. It is, rather, an appeal for thought mixed with a good dose of humility before we jump onto our self-righteous soapboxes and condemn those at the margins of the system who are driven to do the unthinkable under threat of being named and shamed as a school, or getting a university ticket out of poverty as an individual.

Here is a simple lesson from school systems under pressure in all parts of the world - when the accountability applied outweighs the support that is required, normal teachers, principals and students sometimes take shortcuts.

When you are pressured to do things you cannot do - like teach the more complex mathematical content added to the syllabus - you either fight to obtain those resources or you fold under the weight of demands.

Yes, teachers should be held accountable as adults. If you are paid a salary, you must deliver. On those principles I stand firm.

But what if you are in a rural outpost in the Eastern Cape or KwaZulu-Natal without hope of sustained professional development and support and guaranteed a good dose of pressure from well-meaning officials? You do stupid things.