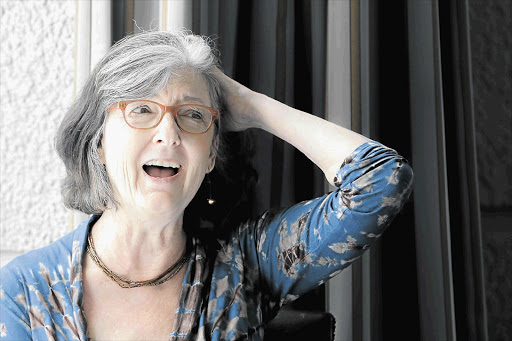 HOME TRUTHS: When I started writing I tried out this pretend voice of a city girl that knows things. It was just awful
Image: ADRIAN DE KOCK

Barbara Kingsolver is living the dream. Not the one about being a bestselling author with all the top literary prizes; hers is about living a life of purpose.

In Small Wonder, a book of essays written in the years after 9/11, she describes "the intimate connection between the will to survive and the need to feel useful to something or someone beyond myself".

Her themes are not small ones. The Poisonwood Bible deals with post-colonial legacies, Prodigal Daughter with habitat destruction and Flight Behaviour with climate change, to mention a few of her novels. But her narratives are so compelling, and her protagonists - almost always feisty, whip-smart women - so likeable, that her books never feel preachy.

In person Kingsolver is charming, engaging, quick to laugh. She's a model of graciousness and good manners. When a glass broke during a (packed) bookstore appearance in Cape Town, she apologised on the klutz's behalf.

She is revered (that's not overstating it - ask her readers) for her ethical stand as much as her writing style. ''Everything I write is about this pull between finding a way to be your own person and finding a way to belong to your community."

She walks her talk, living close to the land in rural Kentucky. But she also spent years exploring, living in the desert and experiencing the outsider status she believes is a necessary condition for a writer.

She came full circle and found her authentic voice.

"I was so ashamed of my Kentucky roots. When I started out I was writing in what I imagined was this very sophisticated voice.I was trying out this pretend voice of a city girl that knows things. And it was just awful. It was the me I was trying to be."

She was living in Tucson, Arizona, at the time. Someone recommended she read Shiloh and Other Stories by Bobbie Ann Mason. "She was from my home state. She was a country girl, writing about Kentucky people in this really honest voice. And that's where the scales fell from my eyes. I saw that I had been lying, and that good work is honest work. The only good voice is an honest voice in literature."

Kingsolver puts an assistant between herself and the world so she can concentrate on writing her next book. It doesn't always work. ''One day I said: 'I don't care if Robert Redford walks up the driveway with no pants on, I'm not coming out.' And then my assistant knocked on the door and said, 'You'll never guess who's on the phone'." She took the call but declined the project.

This trip - her first to South Africa - was a working holiday with her husband, Steven. Next week she'll return to rural Appalachia to grow vegetables and rear alphabetical sheep (they name each year's lambs for a different letter). "We just got through 'Q'. Quark, Queenie, Quanita. We eat them."

Which brings us full circle to another Kingsolver maxim: "The thing is to celebrate what we have instead of being all anxious about what we have not."